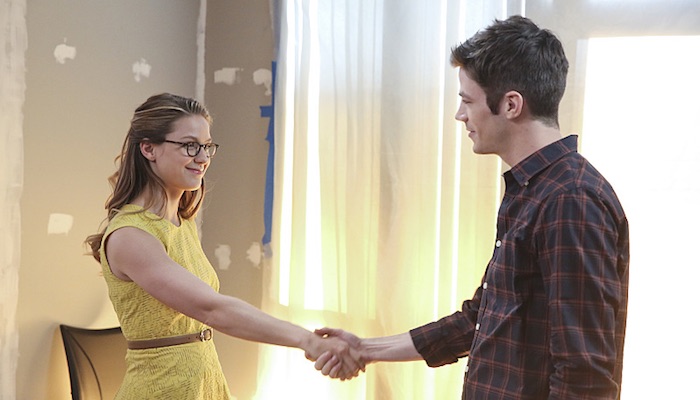 It’s popcorn time for fans of girl power, comic books, and great stories!  Tonight, THE FLASH is coming all the way to CBS from The CW to help SUPERGIRL.

In a tribute to WORLD’S FINEST COMICS, a brand published by DC, tonight’s episode is titled “Worlds Finest.”  To explain, DC’s WORLD’S FINEST titles often combined two or more heroes into one issue, working as a team.  Tonight, two of the finest of different worlds will join forces when THE FLASH finds himself in the alternate universe where SUPERGIRL lives.

According to Executive Producer, Greg Berlanti, in an interview at PaleyFest, the optimism of both characters despite the traumatic childhood loss of parents at an early age, makes these characters simpatico for teaming up to fight crime.

Actor Grant Gustin (Barry Allen/THE FLASH) reportedly shared great chemistry with the SUPERGIRL cast, including fellow GLEE alumni, Melissa Benoist (SUPERGIRL).  That chemistry translates to the screen…enough so that it is easy to believe that characters James Olsen (Mehcad Brooks) and Winn Schott (Jeremy Jordan) are a bit jealous of the Scarlet Speedster.

Regular viewers are aware that the DCTV versions of SUPERGIRL and THE FLASH exist in separate universes, unlike THE FLASH, ARROW and DC’S LEGENDS OF TOMORROW, who all know each other.

Since the same producers helm all four shows, they answered the call from fans who wanted them to overcome the roadblocks for a crossover.  (SUPERGIRL is shot in Los Angeles and is on CBS, while THE FLASH is shot in Vancouver and airs on The CW.)

All four series have become hits for their respective networks, and having the same producers gave the shows a synergistic opportunity to make a crossover happen.

The “C” in The CW stands for “CBS” while the “W” represents the network’s other owner, Warner Bros.  Warners is owned by Time-Warner, also the parent company of DC Entertainment.

Cooperation on all fronts is reflected in the almost-doppelganger key art for this episode and the cover of SUPERMAN #199 from August 1967.

With logistics worked out on the corporate side, Berlanti explains that they had to make the creative side mesh, as well.  Saying, “We needed to create a way to do it…we introduced the multiverse in THE FLASH this year (with Earth-1, Earth-2, etc.), and that was always our way in.”

Since we have seen characters speed their way through the parallel universes, the natural transition is to have Barry flash between Earths into National City, where he meets SUPERGIRL.

In exchange for help with the trip back to his Earth, Barry offers to help Kara take down her two worst former co-workers, Siobhan Smythe (Italia Ricci) and Leslie Willis (Brit Morgan).

If Kara thought working with them at CatCo was unpleasant, wait until she gets a load of them in supervillain action together.  Having already faced Leslie as Livewire, adding Siobhan in her other identity as the Silver Banshee (teased last week), would be tough, even on a Girl of Steel.  (Check out Ricci’s formidable Banshee makeup job above.)

When Silver Banshee breaks Livewire out of her unconscious prison state, the pair decides that Kara, Cat and SUPERGIRL will be there first targets.  To see it from their points of view, Cat fired them and Kara and SUPERGIRL had a hand in their falls from power.

When the dastardly duo grabs Cat (Calista Flockhart) and holds her hostage, THE FLASH lends a hand.  Barry, who has more experience with the superhero thing, is made-to-order to pitch in against the bad guy, er, girls.

The teleplay was written by producers Andrew Kreisberg and Michael Grassi based on a story by Berlanti.  “Worlds Finest” was directed by Nick Gomez.

Rumors are flying that, if this crossover pulls great ratings, there is a chance that SUPERGIRL will be visiting The CW franchise in a multi-crossover event next year. To answer the question of who is faster…tune in for the race!