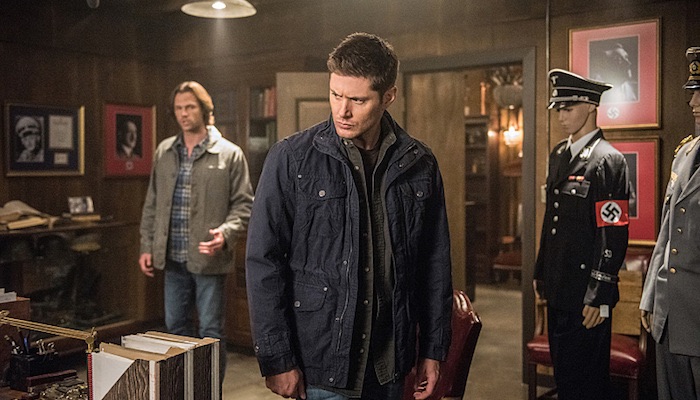 The Thule Society was first introduced in season 8 of SUPERNATURAL. According to show lore, the organization originated in Europe, had access to magic, and was sponsored by the Nazi party in its early days. The Winchesters and their allies have managed to defeat the Thule twice now, most recently in the episode “The Vessel”, when a female member of the Men of Letters prevented the Thule from getting the Hand of God — a magical artifact with tremendous power.

The Winchesters will be doing battle with the Thule Society again in this week’s episode when they learn that the Thule are attempting to resurrect its old leader.

During a visit to Vancouver last week*, SUPERNATURAL stars Jared Padalecki and Jensen Ackles (joined by Misha Collins), spoke to journalists about this week’s episode, the  legacy of Sam’s psychic powers, the methods of the British Men of Letters, and how the boys are still trying to reconnect with their resurrected mother.

Winchesters vs. Thules. “We find out that the Thule, who are back….we believe they may have been in control or in possession of a cursed object of sorts that might have a bit of Hitler’s soul,” Padalecki teased. “And they’re trying to do a Jurassic Park and take the amber out of the tree sap and the mosquito DNA or whatever. Obviously we don’t know how it’s going and so we have to kind of go back and track the Thule and figure out if, in fact, they have succeeded. Though Hitler’s vessel, thankfully, is gone.” However, while Hitler’s vessel may be gone, you should expect to see the “SUPERNATURAL take on what Hitler was really like behind the camera.”

Sam’s Powers. Sam hasn’t used his psychic powers in many years, but the last episode brought them to the forefront when he found another psychic — Magda — who was punished by her deeply religious family for the abilities she was unable to control. Sam managed to get through to her rage by recounting his own experience with the same types of powers. But that doesn’t mean that these abilities will be returning, according to Padalecki. His conversation with Magda was about connecting with her and trying to get her to look past her desire for revenge: “I don’t think it’s something he feels is going to come back or he’s hoping will come back. I think he probably – even though there were obvious benefits, I think he’s probably hoping it doesn’t come back, but he acknowledges it. He considers it part of himself.”

The British Men of Letters. At the end of the last episode we met the mysterious Mr. Ketch, who is cleaning up the “messes” that the Winchesters leave behind. While the pair chose to let psychic Magda live and repair her life after she was held captive by her own mother, Ketch and the British MOL executed her. This is a storyline that will continue to plague the brothers, according to Ackles: “It’s interesting, we’re going to see that storyline get fleshed out in the second half of the season. There’s gonna be some recruitment attempts, some disagreements about methods of hunting, and that will certainly boil to a point. But as of right now, [the British MOL] are trying their method of trying to include us by showing that they have a superior method of dealing with these things than we do, and they’re trying to get us on board with that. But I think we’ll find out in the future that maybe their methods aren’t the best way.” Padalecki called back to an older storyline, saying that it felt familiar in these circumstances: “For me it’s reminiscent of season 6 when Sam was soulless and kind of behaved much the same way the British Men of Letters are behaving now, or at least in their hunting tactics and Dean was obviously not, so it’s fun to revisit that.”

Reconnecting with Mom. In the last episode we also saw the brothers try to deal with losing Mary all over again. This time their mother chose to take a bit of space away from her boys in order to deal with being overwhelmed after recently being brought back to life.  The brothers dealt with this fresh loss in different ways — Sam was understanding of Mary’s need for space, but Dean felt incredibly hurt by her decision. By the end of the episode he seemed more accepting of it when he received a text from Mary saying that she would always be their mother and that she loved them both.  But the awkwardness will continue as the boys struggle to learn the real life person behind the mythical figure Mary has been all their lives. Ackles explained that “There are certainly two different relationships going on, from Sam’s perspective and then from my perspective as well, or rather Dean’s perspective. Because Sam never had a relationship with mom. He was an infant. And Dean didn’t have much of one either. A lot of what he knows and what he remembers about his mother was kind of dictated to him by his father. It’s more his father’s memories of her than it is Dean’s established memories of her. But it’s unique because she’s their mother, but she’s also kind of a stranger. Obviously the brothers are strangers to her as well, which is why you see this struggle to find their footing in the relationship because it is a forced situation. And at least from Dean’s perspective, he doesn’t really know how to fit. He doesn’t know how to categorize the relationship. It’s an awkward thing which I think lends itself to good story.”

Watch the interview below and don’t miss an all new episode of SUPERNATURAL on Thursday, November 9 at 9:00 p.m. ET/PT on The CW. You can also browse through photos from the episode here.

(Note about the video below: the interview took place the week of October 30, so when someone mentions “tonight’s episode” they are referring to the November 3 episode, while the “next episode” means the November 10 episode)