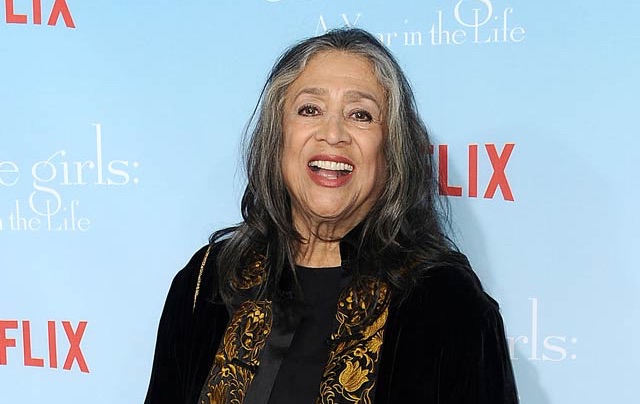 While some binged GILMORE GIRLS: A YEAR IN THE LIFE, some very patient people are savoring the four installments and spacing them out over the next couple of week’s. We’ve got a spoiler free interview with Stars Hollow’s very own, Miss Patty, Liz Torres to hold you over until you finally cave and binge the rest of the season.

Everyone really wanted this revival and really fought to get this revival. How did it feel to know that so many people truly wanted this show to come back?
Liz Torres: Oh it’s amazing! It’s such a miracle that anything gets done on television that lasts. It used to be in the old days – because I started back in the 1800s (laughs) they would shoot a pilot, then take up twenty-eight shows, now if you do eight you’re lucky. It’s a miracle that people like it and watch it and that the network picks it up. I’ve been doing this since I was a kid, I’m so happy and really grateful to be a part of something so wonderful.

Why do you think way back when the show premiered people fell so hard for a show with such low stakes?
I don’t think there had been a show with a mother that young. Lauren was so young; those issues were fresh during that time. There were so few shows that were directed at the heart of women like that, such a clear generational gap, I think that’s why. Also, because older women who have grown children, it’s refreshing, a young mother daughter relationship.

Did it take you a while to get back into character when you stepped back on set for the first time? Did it come to you naturally?
Totally natural! It’s a second skin for me, it doesn’t feel like I’m acting. Sally (Struthers) does a character and she puts a lot of energy into it, and I’m just Miss. Patty, I felt like I should’ve given Miss. Patty a little more color, and let the words carry me. I thought that Miss. Patty was a tough talking, showbiz broad, so I just really tried to sell the words.

Whose storyline were you most excited for in the revival? Luke (Scott Patterson) and Lorelai (Lauren Graham)? Rory (Alexis Bledel)?
Well I always thought she’d end up with Luke! I was always kind of rooting for him, he’s so difficult and so interesting, but he’s not a bad guy he’s just difficult. He deserves somebody like Lorelai to nudge him into reality. I was always pulling for him. I’m not sure which way the show will go, but she’s always had such wonderful boyfriends too, it’s hard to pick, but I guess I’m rooting for Luke because he’s been there since the beginning.

What can you tease about your scenes?
I’m paired up with Babette (Sally Struthers) again, so that should be the Abbott and Costello of Stars Hollow. Working with her is such a joy because I was in ALL IN THE FAMILY with her years ago and I just know what she is going to do before she does it, and she knows what I’m gong to say before I say it. It’s like we’re working on telepathy with each other and it’s so much fun. I get so happy when I see her.

You can stream GILMORE GIRLS: A YEAR IN THE LIFE now on Netflix.