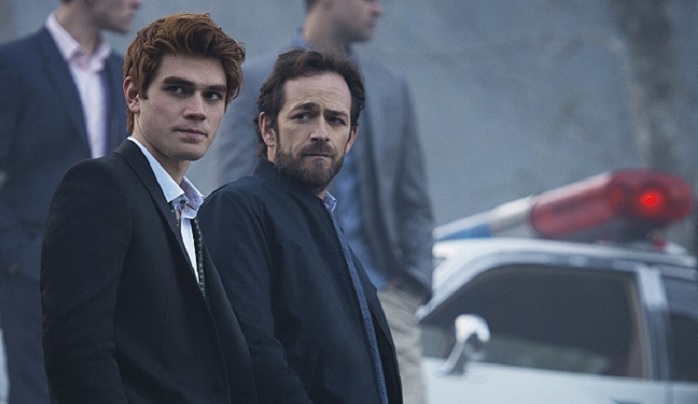 What’s coming to The CW the week of January 30? Someone tries to take revenge against Castiel on SUEPRNATURAL, evil returns on THE VAMPIRE DIARIES, Livewire escapes from prison on SUPERGIRL, THE 100 returns for a new season and more.

SUPERGIRL 2.10 “We Can Be Heroes”: After Livewire (guest star Brit Morgan) seemingly breaks out of prison, Supergirl (Melissa Benoist) is intent on recapturing her. After training Mon-El (Chris Wood), Supergirl takes him with her when she sees Livewire attack the NCPD but things go awry when Mon-El puts Supergirl before the citizens of National City. Meanwhile, James (Mehcad Brooks) decides to come clean with Kara and M’Gann (guest star Sharon Leal), has a psychic attack and collapses into a coma. Rebecca Johnson directed the episode written by Caitlin Parrish & Katie Rose Rogers

JANE THE VIRGIN 3.09 “Chapter Fifty-Three”: Jane (Gina Rodriguez) and Michael (Brett Dier) are both feeling the pressure – Jane with turning in the perfect novel and Michael with passing his upcoming test. Jane and Rafael (Justin Baldoni) become concerned over Mateo’s development when they learn that other children his age are more advanced. Rogelio (Jaime Camil) invites everyone to the last day of filming for his telenovela, but he is not pleased with the ending. After watching Xo (Andrea Navedo) and Rogelio’s interaction, Darci (guest star Justina Machado) begins to question her and Rogelio’s potential relationship. Meanwhile, Rafael is upset when he learns what Petra (Yael Grobglas) is up to, but she explains that she is protecting him once again. Ivonne Coll also stars. Gina Lamar directed the episode written by Chantelle M. Wells

THE FLASH 3.11 “Dead or Alive”: H.R.’s (Tom Cavanagh) past catches up with him when a bounty hunter with vibe powers named Gypsy (guest star Jessica Camacho) arrives in Central City to bring him back to Earth-19 to stand trial for his crime. It turns out inter-dimensional travel is illegal on their Earth. H.R. surrenders but when Barry (Grant Gustin) and Cisco (Carlos Valdes) find out that H.R.’s only hope would be to challenge Gypsy to a fight to the death, they intercede and Cisco offers to fight Gypsy instead. Harry Jierjian directed the episode with story by Benjamin Raab and Deric A. Hughes and teleplay by Zack Stentz.

DC’S LEGENDS OF TOMORROW 2.10 “The Legion of Doom”: The Legends are determined to find and rescue Rip (Arthur Darvill), but first must focus on locating the Spear of Destiny. Stein (Victor Garber) thinks he has the perfect person to help but knows involving her will be risky. Meanwhile, Malcom Merlyn (guest star John Barrowman) and Damien Darhk (guest star Neal McDonough) realize that Thawne (guest star Matt Letscher) is pitting them against each other. Caity Lotz, Brandon Routh, Dominic Purcell, Nick Zano, Franz Drameh and Maisie Richardson-Sellers also star. Eric Laneuville directed the episode written by Phil Klemmer & Marc Guggenheim.

ARROW 5.11 “Second Chances”: In his quest to take down Kovar, Oliver (Stephen Amell) gets help from a surprising source – Talia al Ghul (guest star Lexa Doig). However, when she reveals what she wants from him in exchange, Oliver isn’t sure he can accept her help. Felicity (Emily Bett Rickards) attempts to hack the NSA to help free Diggle (David Ramsey) but when her online efforts are flagged, she faces off against an unknown adversary. Meanwhile, Curtis (Echo Kellum) tells the team about a female vigilante, Tina Boland (guest star Juliana Harkavay), he uncovered online who has been wreaking havoc all over the country. Mark Bunting directed the episode written by Speed Weed & Sarah Tarkoff.

SUPERNATURAL 12.10 “Lily Sunder Has Some Regrets”: Lily Sunder (guest star Alicia Witt) steeps herself in black magic, honing her powers for over a century, waiting to exact revenge on a band of angels that murdered her family. Sam (Jared Padalecki) and Dean (Jensen Ackles) must work quickly to stop Castiel (Misha Collins) from becoming her next victim. Thomas J. Wright directed the episode written by Steve Yockey.

RIVERDALE 1.02 “Chapter Two: A Touch of Evil”: As new details of Jason’s death begin to emerge, Archie (KJ Apa) pleads with Miss Grundy (guest star Sarah Habel) to come forward with what they heard at Sweetwater River. Betty (Lili Reinhart) makes an effort to mend her friendship with Archie but takes a different stance with Veronica (Camila Mendes), who is trying to make up for her actions. With rumors around her brother’s death running rampant, Cheryl (Madelaine Petsch) deals with the pressure in true Queen Bee fashion, while tensions boil over when Jughead (Cole Sprouse) stumbles upon a secret Archie was hoping to keep hidden. Finally, plans for the annual fall pep rally move forward with a performance by Josie (Ashleigh Murray) and the Pussycats and a special appearance by Mayor McCoy (guest star Robin Givens.) Marisol Nichols, Madchen Amick and Luke Perry also star. Lee Toland Krieger directed the episode written by Roberto Aguirre-Sacasa.

THE VAMPIRE DIARIES 8.11 “You Made a Choice to Be Good”: Cade (guest star Wolé Parks) returns to Mystic Falls and presents Damon (Ian Somerhalder) and Stefan (Paul Wesley) with additional assignments, each with unthinkable consequences. Even with tension growing in their friendship, Caroline (Candice King) and Matt (Zach Roerig) do their best to protect the town’s residents from Cade’s appetite for their souls. Bonnie (Kat Graham) and Enzo (Michael Malarkey) hit the road on a romantic trip, taking the bell with them in hopes to keep it safe. Carol Banker directed the episode written by Melinda Hsu Taylor & Celine Geiger.