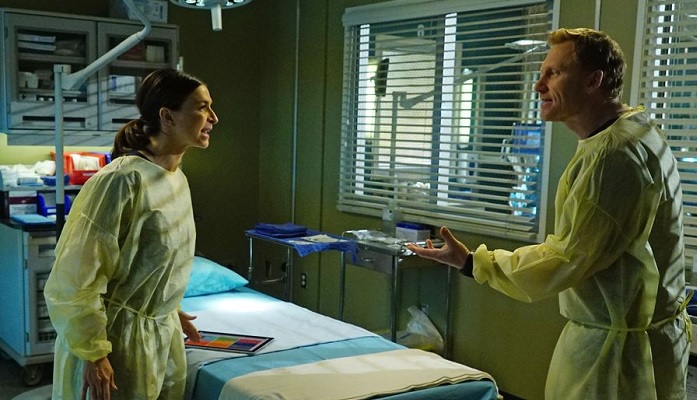 In the world of Shonda Rhimes’ GREY’S ANATOMY relationships are at the very core of the popular television series. In tonight’s all-new episode, those relationships will be tested as the doctors at Grey-Sloan Memorial hospital go face-to-face with their loved ones in order to mend their differences.

In the sneak peek below, Amelia is back at Grey-Sloan and continues to avoid Owen. Clearly upset over the situation they’ve been in for weeks, he finally has the opportunity to confront her with the question we’ve all had on our minds — “Are you ever coming home? Or not?” Honestly, I sure hope she does — haven’t they both suffered enough in their previous relationships? I smell reconciliation, at least I hope for one.

Elsewhere in the hospital, Meredith and Riggs have been dragging out what I believe is an inevitable relationship. They have been hinting at this for months now, but will Mer go “all in” as Riggs declared he would last week? As the clip below suggests, she’d like him to be more likeable and serious towards her and those she holds dear. Will Riggs make the necessary changes to be with her?

Meanwhile, after weeks of tension between Bailey and Richard, she tries to mend her relationship with her previous mentor and long-time friend.