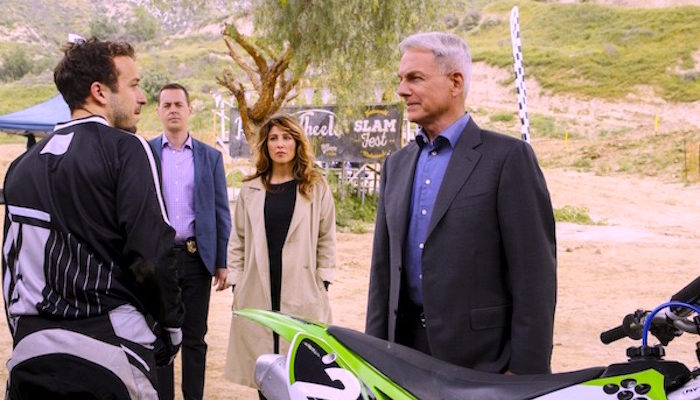 NCIS Special Agent Nick Torres (Wilmer Valderrama) must have led an epic life while he was undercover. He loved and lost. He charmed his way through a drug lord’s empire and fooled a lot of people along the way. He flirted and danced the night away.

And, evidently, he raced dirt bikes.

Tonight, a little more of that past catches up with Torres when his connection to a bank-robbing, dirt bike riding gang intersects with the death of a Marine.

When Corporal Kyle Campbell is found face down in the mud, purportedly discovered by a hitchhiker, the corporal is determined to have been moved after his demise.

When Torres arrives on scene, he thinks that dirt bike tracks near the body may be linked to bank robberies and to a dirt bike gang that he joined while he was working undercover.

As Torres scours his contacts and notes from the case, will he find a connection to Campbell, a cargo clerk stationed onboard the USS Saipan out of Norfolk?

Or will the gang find a revealing connection to Torres?

The exploding dirt bike in his garage seems to indicate that someone has connected his real life to his undercover persona. How is he going to explain that to Gibbs (Mark Harmon)?