AMERICAN GODS closed out its first season with an epic confrontation between Mr. Wednesday (finally explicitly revealed to be Odin, among his many other names) and the New Gods. To say that “Come to Jesus” was solely his story, however, would be to do what men have done throughout history: silence women. From the very first moments of this season finale, when Anansi began to tell a story — what he does best — it became clear that, as has been refreshingly true for the entirety of the series’ first season, the AMERICAN GODS finale was going to make sure those marginalized amongst us had a chance to be heard. Even better, “Come to Jesus” made it painfully obvious that the only way to win this war between the Old Gods and the New would be to enlist the help of women, a concept often met with plenty of skepticism. But not on AMERICAN GODS — not here at all.

“Let’s start with a story.” Bilquis comes to America

That was in the old days, though — 864 B.C.E. to be exact — in the Temple of Bar’an. As time passed, those men became more capable of taking Bilquis’ power. She tried to continue, to “keep the party going,” as Mr. Nancy put it. She thought that, as long as she could remember who she was, she could adapt. She’d stay in power, one way or another. “But America, too, could take issue with a woman of power. It finds ways of cutting her down. Of punishing her for her daring to be.”

In the modern world, right around the time of the sexual revolution if Bilquis’ chosen attire was anything to go by, men stole everything. They “forced” the queen to the backseat, with knives and guns. In one scene, as Bilquis and other women fled a disco, one man forced a woman to the ground and had his way with her. And with that, Bilquis’ agency, her power as she knew it, was lost once and for all. “They laundered it and gave it to men.”

The implications, particularly with the one nameless woman being pinned to the ground, were obvious: Women’s sexual power has, all too often, been ripped away by jealous, angry men. It has a name. It’s called sexual assault; it often manifests as rape. Even in 2017 America, 50 women can accuse a man, only for him to walk free on a technicality. “And there is no end to the cruelty of men threatened by strong women.” The cases are endless; they’re horrifying. They’re often covered up for decades. Such is the life of a woman — such became the life of Bilquis.

So, what did Bilquis do? As the HIV epidemic spread across America in the ’80s, she, too, suffered from illness. Because of the threat of disease and the resurgence of American “traditional values,” nobody wanted to worship her in the traditional way. Those “values” also had a damaging rebirth a world away. Bilquis’ temple was destroyed by those who didn’t want to see evidence of a time when sexuality was worshipped, not judged as dirty or sinful.

In one particularly heartbreaking scene, Yetide Badaki’s character stared into an Ethiopian restaurant with such hope, such awe, all because she saw her own face reflected back to her on the cover of a menu. She saw her temple on a television screen. The former queen and goddess had the briefest of moments to remember who she’d been. But just as easily as her spirits were lifted, they were utterly crushed as she saw the destruction of her temple broadcast live. (Hi, Media.) 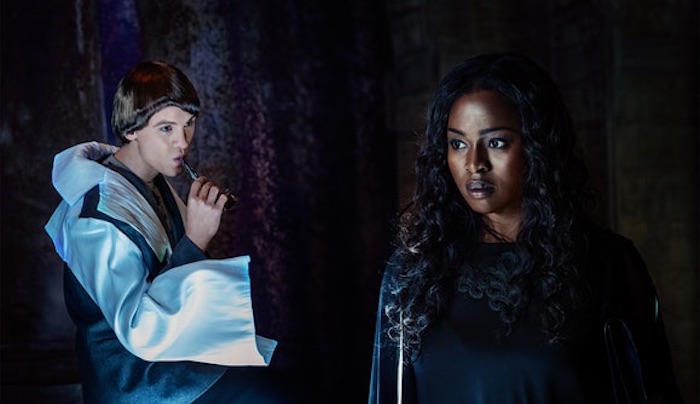 “So, what’s a queen to do? She gets on her knees. She takes what she don’t want to. And we watch in easy fucking judgment and pretend we’d do a single thing different in her shoes.” In a dual message, Anansi talked about the way men and women alike do whatever awful thing must be done in order to get by. Homeless? Try begging — or worse: prostitution. A once-powerful goddess, cast aside by society? Try joining up with the bad guys. In Bilquis’ case, it was probably some mixture of the two. Certainly, AMERICAN GODS viewers saw evidence of her joining up with the New Gods. Technical Boy offered her a lifeline: online dating. Through this, she was able, as we’ve seen in scenes scattered throughout AMERICAN GODS’ first season’s run, to begin to regain some of her power.

It’s been a slow and painful process, but Bilquis is just about back to full strength. Now, she’ll have to repay the New Gods somehow. The full consequences of Bilquis’ decision, though, will have to wait for AMERICAN GODS’ second season. As “Come ot Jesus” closed out, she was seen approaching The House on the Rock, the gods’ gathering place for war. Whether she’ll summon all of her new power in defiance of Technical Boy and the others or, however regretfully, stick to repaying her debt, is yet to be seen.

What is painfully obvious from this oral history, though, is that even goddesses are not exempt from suffering at the hands of angry, jealous men’s cruelty. That no matter how celestial a being may be, if the body is female, its very agency can and will be stripped away. A woman’s body, in America and in much of the rest of the world, is nothing more than a pawn in men’s games.

And that, I suppose, brings us to Easter 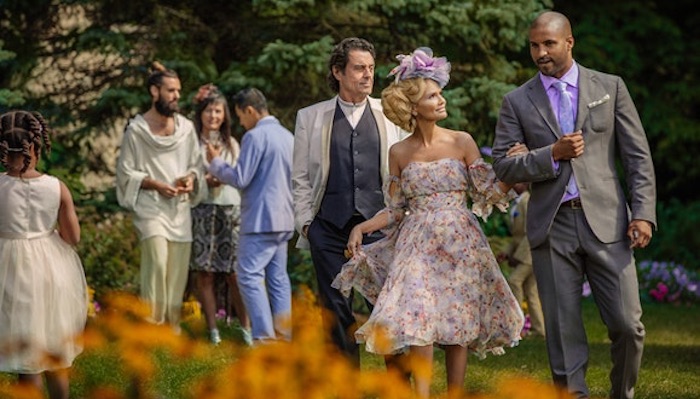 After one of their usual bickering sessions, Shadow Moon and Mr. Wednesday — still not named, unless you’ve actually been paying attention — set off for Kentucky. Donning shiny, new suits created by Mr. Nancy, the two men were in just the right attire to attend an Easter celebration, complete with a crowd of Jesuses and all the pastel trappings of the commercialized version of the holiday. The moral of Mr. Nancy’s story was that he should get himself a queen, so the two men were in search of the most powerful such queen they could find.

Again, a woman being used as a pawn in men’s games.

The goddess Ostara was more able to adapt than Bilquis had been, but they shared the sin of turning to the New Gods for help when their traditional sources of worship were no longer available. Although her feast day of rebirth had been stolen by Christianity in an attempt to wipe out pagan holidays, she happily shared the day of chocolate bunnies and jelly beans with Jesus himself. It kept her relevant; maybe it kept her in a sense of denial, too. Ostara, now Easter, was reveling in the benefits of one of those rebranding schemes offered by the New Gods. She even had a standing date to celebrate the holiday with Media herself. When Media (literally) waltzed in, planning to spend the day with her friend as usual, though, she was met with resistance.

Ostara, swayed by Mr. Wednesday, was now tired of being “misrepresented in the media.” (Oh, and so many women are. Ostara, you’re not alone.)

Once Ostara told Media she was done playing along, the stand-off between two of the most powerful women on the series (maybe the most powerful characters, period) became one of the best scenes in AMERICAN GODS’ entire eight-episode run. Then, after that tense moment brought the rest of the major players into the moment, all hell broke loose.

It was Media versus Wednesday, with Ostara caught in the middle. Media even held onto some hope that she would keep Ostara’s loyalty. But all the marketing in the world simply couldn’t fix the rift that was created the second Easter was reminded that she wasn’t actually Easter at all, that Jesus “crucified” her holiday. With that, Odin dedicated the deaths of the New Gods’ thugs to Ostara. (Really, if it had just been those three in the scene, without all of the background noise of Technical Boy and, eventually, Mr. World, that would have been quite all right.)

With a flash of lightning, everyone but the gods — both Old and New — remained. The extras were decimated. Finally, Odin revealed his true identity to Shadow Moon, reciting all of his own names and feeling his power grow as Shadow finally admitted to believing. It was a great display of miracles and a big moment for Odin, who had hidden his true nature for so long.

It was Ostara, though, who owned the day. In a display of power that was second to none, she wiped out all the vegetation for miles before restoring her own home to its bright and beautiful Easter best. With that, Odin had his war. But again, he didn’t get it without Ostara’s power. Without her help, without swaying this woman to his side, he might have stayed in limbo, forever doomed to posing as “Mr. Wednesday.”

Women have power on AMERICAN GODS. With Ostara and Bilquis, two women with the power of rebirth in their arsenal, currently operating on opposite sides of the divide, the series’ second season is sure to be nothing if not a lesson in the dangers of pitting strong female characters against one another.

Or, at least, that’s what this viewer is hoping for. Don’t let me down, Fuller and Green. Don’t. Let. Me. Down.