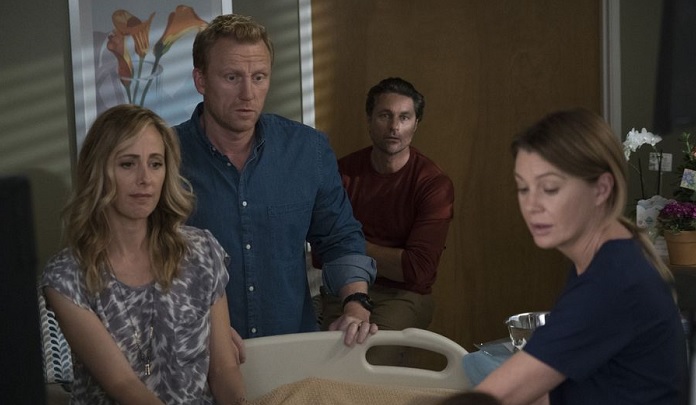 GREY’S fans, are you ready for TGIT? GREY’S ANATOMY returns tonight with a special 2-hour premiere event to begin a highly-anticipated Season 14. When we last saw our favorite doctors they were fighting a fire inside Grey Sloan and we witnessed the departure of Dr. Edwards. Meredith had broken the news to Nathan about his presumed-dead fiancé (Megan) and Owen, alongside Amelia, had arrived at the Army Hospital to greet her. There’s some love triangle complications coming and if we know this show at all, it will be a rollercoaster ride.

Past and present relationships will take center stage this season. With Riggs having Megan back in his life, Meredith is on the backburner for now — or is she? The teaser below shows us that she’s certainly not going anywhere. Owen and Amelia have had a rough time during their marriage recently, but Amelia being beside him and supporting him whilst his sister is undergoing medical treatment might bring them closer — at least that’s what we hoped. With Teddy back in Owen’s life, is their marriage in more danger than before? And lastly, there seems to be something brewing between Jackson and Maggie — at least that’s what April said during the finale.

Meanwhile, Bailey is forced to give the hospital a facelift after the fire. In the sneak peek below, she gives the doctors an update on the hospital’s condition. Arizona also deals with her relationship and Jo gives an update about Stephanie’s whereabouts.

During the premiere, Jo will make a surprising choice regarding Alex, and Andrew’s sister’s controversial research leads to a shocking discovery.

Watch the clips below and tune into GREY’S ANATOMY’s Season 14 premiere tonight (September 28) at 8:00 p.m. EST/PST on ABC.