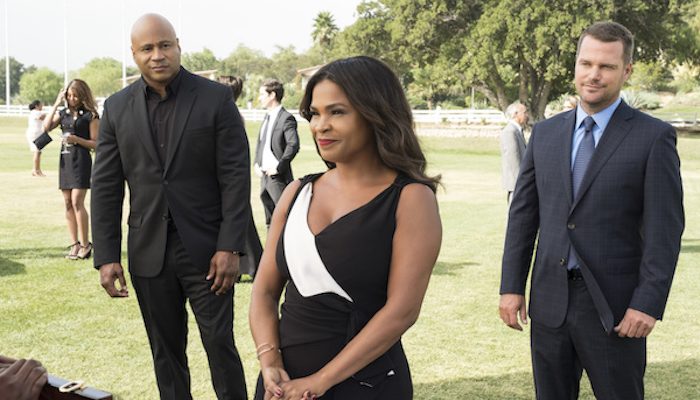 New NCIS: LOS ANGELES cast member, Nia Long, has had plenty of experience strutting her stuff down the red carpet. A multiple nominee/winner for several prestigious acting awards, Long, who replaces the late Miguel Ferrer, at NCIS: LA this season, looks right at home in designer duds at a high-powered charity event.

As Executive Assistant Director, Shay Moseley, Long’s character secures the invitation as NCIS: LOS ANGELES investigates the theft of weapons that will sell for over $1m if NCIS does not get to them first.

Also in the mix is a friend of Sam’s (LL COOL J), a lot of alcohol and a possible assassination attempt. Mosely presses Sam and Callen (Chris O’Donnell) into undercover service as her bodyguards at the event, where Sam points out the obvious…guns and alcohol are not a good combination…

…especially not when mixed with formalwear.

Noting her bodyguards’ usual casual attire, Mosely encourages the pair to step up their game. Guess she never saw O’Donnell decked out in SCENT OF A WOMAN.