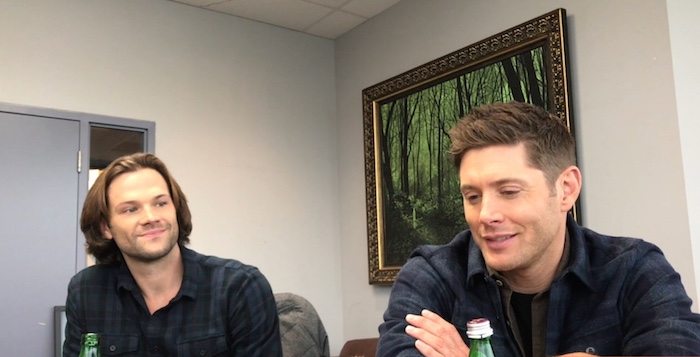 Castiel reunited with the Winchester brothers on this week’s SUPERNATURAL and the angel will be delving into a case with Sam and Dean in the next episode. He’ll also get a chance to meet Jack for the first time since his birth. Once that meeting happens, the group will head to Texas to investigate a case and fulfill Dean’s obsession with everything cowboy related.

During a visit to the set of SUPERNATURAL in Vancouver, we spoke to Jared Padalecki (Sam Winchester), Jensen Ackles (Dean Winchester) and Alex Calvert (Jack) about the reunion with Cas and what’s to come in the next episode.

How Important Are the Winchesters? Before moving on to the next episode, we noticed that Billie brought Dean back from the dead this week because, according to her, Sam and Dean are “important”. We’ve always known that the Winchesters are crucial to the fate of the universe, but does Billie know something now that we don’t? Jared and Jensen aren’t yet sure. “We haven’t really found out why just yet,” Jared explained. “We know we’re important for some reason, but true to SUPERNATURAL form I think it will be a surprise to Sam and Dean and Jared and Jensen. I think the brothers have always felt like they have a higher cause and a greater calling, so I think they’re looking forward to figuring out exactly what it means.”

Loss of Faith. The meeting with Billie also revealed that Dean feels a bit loss after the recent deaths of his mother and friend. Cas’ return, however, will be considered a bit of a “win”, according to Jensen. “At the end of last season and the beginning of this season we do see that Dean is just of like given up, so to speak. So the return of Cas has ignited that fire again. He’s got some hope and motivation to dig a little deeper and see what we can figure out. Because if he was written off and Mom was written off, maybe there’s a few other people that shouldn’t have been written off. And we figure that out as the series continues to move on.”

Related: Watch some outtakes from our SUPERNATURAL interview with Jared & Jensen

Skeptical Sam. While Dean is just happy to have his buddy back and doesn’t seem to question the reason beyond Cas’ return going forward, Sam is a bit more skeptical, according to Jared. “I think Sam is really looking to find out what happened and how did it happened. Also, not just because of Sam’s intellectual curiosity, but Sam still wants mom back and, heck, if we can start calling out who we want back, I’m sure there are a lot of people Sam wouldn’t mind to bring back. So I think Dean is so relieved to have that win he’s looking for, and to have our buddy back. Sam’s like ‘OK, it is great, I agree, but, you know, to quote Dean — the other shoe is probably going to drop. So what else can this person do?'”

Jack and Castiel Meet. Castiel spent the later part of season 12 protecting Jack before his birth because he believed that the boy could help the world. Jack “adopted” Castiel as his surrogate father and was devastated when he learned that Cas was gone at the beginning of season 13. Now the two of them will finally come face-to-face. We’ll see that Jack and Cas are “close because they think it’s like meeting the only other alien,” Alexander said. “You’re an alien on the Earth and you thought you were alone, but then suddenly there’s someone who’s actually like you. I feel like they have that unique bond.” This moment will mean “everything to [Jack]. I don’t want to say too much cause I think it’s all kind of there when we see it, but I mean, a huge moment for Jack.”

Dean’s Love of Westerns. We saw that Dean is obsessed with Westerns all the way back in the season 6 episode of “Frontierland”, but he’ll get a chance to revisit that in the upcoming episode “Tombstone”. “I don’t think it’s any shock that I’ve always been kind of a fan of the iconic symbol of a cowboy and everything that comes along with that,” Jensen said. “A fan of western movies and everything. So when I read that Dean gets all excited about it and decides to play the part up, so to speak, I of course got excited as well. I think there’s a nice slow-mo montage of some snakeskin boots and a hat and the whole bit. But yeah, instead of playing FBI agents we get to play Texas Rangers, which is kind of fun.” Alexander said that the crew was so into this episode that “everyone in the crew dressed up as cowboys for one of the days.” (Browse through photos from the episode).

Watch a portion of our interview with Jared, Jensen and Alexander below (more to come!).

SUPERNATURAL airs Thursdays at 8:00 p.m. ET/PT on The CW.