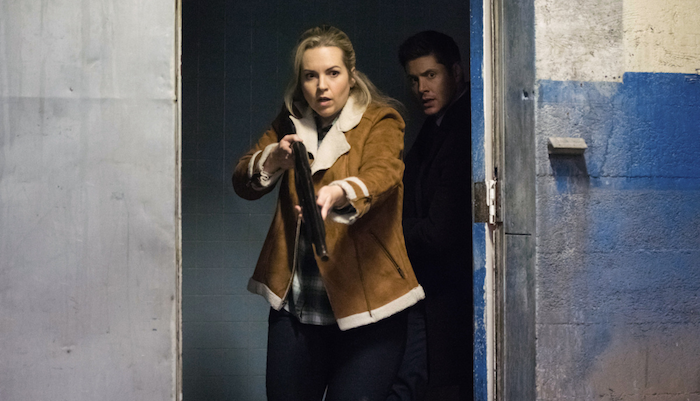 Donna is usually a happy-go-lucky character on SUPERNATURAL, but in the next episode we’ll see her as we never have before. When a family member goes missing, Donna calls on the Winchester brothers for help. During a visit to the set of SUPERNATURAL, Briana Buckmaster (Donna Hanscum) previewed the next episode, titled “Breakdown”.

“Donna has such a special place in my heart,” Buckmaster shared with us. “It’s going to be such a huge — knock on wood — part of my life, and is currently. When I got cast in that role, it was a very small role. It wasn’t even a guest star role at the time, and I was very excited to play a character that had this fun accent and had this kind of complex storyline about being the leader and sheriff of a town but also really insecure, feeling like her husband’s left her. There’s lots going on there. And over the past couple of years she’s developed strengths in new areas that teach her to grow and areas she thought that she was weak. So what a great thing for me as a human person and me as an actress to get to learn through Donna about what we can do through hardships.”

“[The January 25 episode] goes even further into the character — what she’s going through, what she’s capable of, and what she’s going to do moving forward. I’m more excited about this script than I’ve probably been about anything for my specific character. I think what’s great about Donna is she’s very relatable in that way. She’s just kind of a regular woman, having regular, everyday insecurities that we all have, and watching her succeed though that and knowing that we all can succeed though that.”

In the episode, which will show us another side of Donna, Buckmaster explained that, “Donna’s niece goes missing, and she’s very close to her niece, so it’s a situation that she doesn’t necessarily feel is necessary to get help for, but she is desperate. I think that for an episode that Donna has previously been in, it’s very different. She’s usually kind of funny and bright and sunny and she’s not in this episode. She is haunted, she is broken, she is vacant, she is lost, because she has lost this woman who’s like a daughter to her. It is an intense, dark, creepy episode. I don’t want to give too much away but for me, it’s a darker episode than I’ve ever been a part of and you see what she’s willing to go through moving forward.”

Related: Browse through photos from the “Breakdown” episode of SUPERNATURAL

As for Donna’s relationship with the Winchester brothers, Buckmaster hinted that the relationship “grows because we now have a stronger connection. I think when they first met Donna they felt a need to protect her in a way. And they did, but they also taught her ways to protect herself and to protect others which made her stronger. As that grows, I think she is creating a bond with the Winchesters because they’re all hunters now. They’re the king hunters and she’s growing under them. I think that brings them a sense of pride and also gives them an ally. I think that relationship is just going to keep growing stronger.”

Watch a preview below for an all new episode of SUPERNATURAL airing on January 25 at 8:00 p.m. ET/PT on The CW.

Time to return the favor. #Supernatural is new TONIGHT at 8/7c on The CW. pic.twitter.com/ihissJh6R1