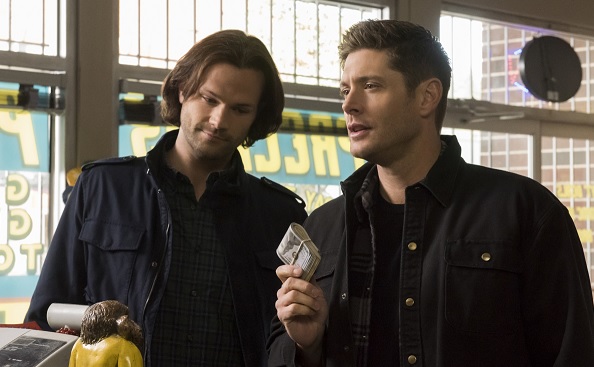 It’s hard to imagine that SUPERNATURAL is going to hit a milestone that few shows in the history of television have ever reached: 300 episode. Fourteen seasons into its run, the show about two brothers hunting supernatural creatures has introduced us to dozens of fan favorite characters, seen Sam and Dean Winchester travel to Hell and Heaven and back, and always comes back to a show about two brothers who will stop at nothing to save each other — and the world.

Back in the fall, we participated in a red carpet celebration for the show’s 300th episode, which is set to air this week, and spoke to various cast members and producers about the episode itself and the legacy of the show they hope to leave behind once Sam and Dean finally quit the hunting game. At the time of the interviews, it wasn’t yet revealed that Jeffrey Dean Morgan (who originated the role of John Winchester and hasn’t appeared on the show since the end of the second season) would be returning for the milestone episode. But we did get a sense that the episode is going to focus primarily on the town of Lebanon, which is home to the Men of Letters bunker that Sam and Dean settled into after years of living in motels. In fact, we’re going to begin the episode by learning what the townspeople think of these two men who live in their midst. “Lebanon has, at most, been a dark alley or a place where the guys go for a beer run. And to actually look at the people who live there and wonder these mysterious handsome strangers are in their midst who don’t seem to live anywhere but keep popping up. So I think that’s an interesting thing to do. But that isn’t all of the episode. It’s an umbrella over the episode,” producer Brad Buckner teased.

“The teenagers that we meet [in town] all have notions [that] they’re serial killers, they’re FBI agents…you know, crazy stuff,” showrunner Robert Singer said. “Some of the older people in town — you know, the guy at the liquor store knows what the usual order, the lady in the post office where they might pick up their mail — knows they’re just these guys. And then as the episode goes on and it gets turned on its head a little bit the town reacts in a different way and there’s a guest star that comes in that’s going to really turn the episode on its head.” That guest star, of course, is Morgan, whose character has an emotional reunion with his sons and wife (see photos) after appearing thanks to a wish that Dean makes.

While we only had a few minutes to speak to Jared Padalecki (Sam Winchester) and didn’t get a chance to ask him about the 300th, his co-star Jensen Ackles (Dean Winchester) said that the two of them had quite a bit of input into the events of the episode. “For some weird reason [Jared] and I had gotten really inspired this year. This is such an important milestone. I was made aware today that we are of 25 shows in television history that have made this many episodes out of thousands [of TV shows]. He and I got on the horn with the guys down south and pitched a few ideas. But I think that that kind of collaboration — because we’re still fans of the show, we’re still fans of this story and these characters — but we’re also fans of the history of where this show has come from. Those were certainly elements that I wanted to have come into play. So hopefully they got inspired by a few things that we said.”

When asked how this particular milestone is different from the 100th and 200th episode, Misha Collins (Castiel) said “the 200th episode was a little bit of a meta romp. The 300th episode is going to be a little bit more reflective and a little bit more poignant and a little bit more emotional than previous centennial episodes.” Having seen the episode, we can tell you that there’s a great deal of emotion. The reunion between John, Dean, Sam and Mary is tear-inducing, particularly the individual conversations he has with his sons. Past wrongs are addressed and there’s a lot of love shared. The family dinner is a moment that Dean, in particular, has wanted since he was four years old. And it’s a conversation that Sam needed to have after a tumultuous relationship with his father, especially after he retired from hunting to attend college.

As for the show’s legacy, executive producer Phil Sgriccia said that “the way this show works, it’s about the family, about the brothers and the connection they have — both in real life and in the show. And it’s about how through thick and thin somebody will have your back and help you in times of trouble. So I just hope that people take that as part of the fun that we’re trying to have with it, but also just that when you’re down and need a hand, maybe somebody’s there to help you, just to lean on.”

“I think a lot of the success [for SUPERNATURAL] goes directly to [Eric] Kripke for having the great idea and executing the great idea, for Bob Singer for teaming up with him back them,” actor and director Richard Speigt Jr. (Gabriel/The Trickster) said. “Bob Singer for being the tentpole director and producer for all of those years with different showrunners coming and going — including Sera Gamble, Jeremy Carver, Andrew Dabb. You know, Bob’s been the consistent tone setter. Phil Sgriccia for cover the post, which is an under-sung, under-appreciated piece of the art, because the assembling of it and the editing of it — and the sound and all that — is crucial and Phil as a director and as an EP overseeing that is phenomenal. And then you obviously have Jared and Jensen who have been two guys who have been telling great stories as performers and caring as people about those stories and about those characters for all 300 episodes, from the pilot until the next time they go to shoot on Monday. They care, they put in the effort, they put in the time and the talent to making sure that the show stays as fresh and as new and as good as it was day 1. And there’s not a lot of performers out there who would do that, who would still care that much and try that hard, who would be that kind to each other and to their coworkers and fellow crew members. So I think they get a lot of the credit for making this thing happen and for us to be here celebrating it tonight.”

While it’s clear that SUPERNTURAL still has a lot of story left to tell (the show was just renewed for season 15), we couldn’t help but ask various actors (past and present) what they hoped would be the endgame for their characters. Samantha Smith (Mary Winchester) said “I can’t imagine Mary retiring. Like, how does that look? That’s just weird. Even when she had Dean, she was still hunting on the sly, right? But [at] a certain point, maybe she’ll be able to get to the point where she can actually spend most of her time just away — I don’t think a hunter wants to retire to New York City. Just in somewhere quiet where — I don’t know, there’s monsters everywhere I think about it and I just can’t imagine her ever just quitting. So hopefully not a bad end.” At the time, we asked Smith about the possibility of her character one day having an opportunity to reunite with John Winchester. She said “getting to see the love of your life again, that would be a dream come true for everyone,” which seems particularly poignant now that we know this reunion is set to happen soon enough.

Then there’s Ruth Connell (Rowena), who gave the most delightful answer to the question “where would you like your character to end up when the show ends?” by saying “I would like an ending where [Rowena] does take over the world and ascends on a pink cloud drinking champagne with various masseuses around her. With magic at her fingertips and everyone just wearing sparkling eye shadow and ballgowns below her.”

Whether SUPERNATURAL ends with ballgowns or a Winchester sacrifice, there’s no doubt that Sam and Dean will continue to fight until the end. The 300th episode of SUPERNATURAL airs on Thursday, Februry 7 at 8:00 p.m. ET/PT on The CW.