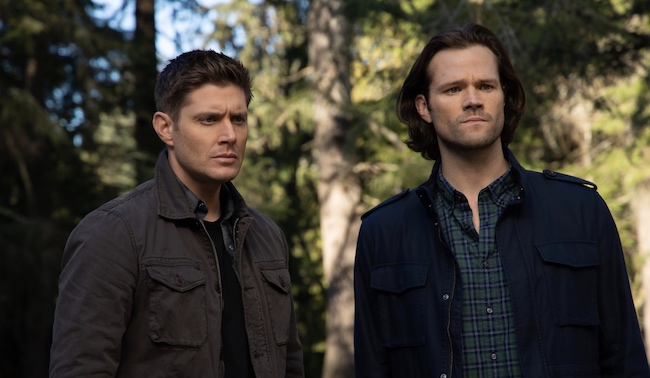 God set out to destroy the Winchester brothers and their friends Castiel and Jack after they refused to play his game any longer in the season finale of SUPERNATURAL, unleashing monsters and demons that the brothers had previously defeating and setting out to destroy their very reality. As the show comes to an end next year, will the Winchesters manage to finish their story on their own terms?

Related: Read spoilers from the SUPERNATURAL press room at Comic-Con

10.40 – The panel opened with a long retrospective, chronicling all 15 years of SUPERNATURAL from start to finish.

11.03 – How are Jared and Jensen feeling about the end of the show? “Can we all just start crying so I don’t feel weird?” Jared asked. He also keeps throwing questions about the end to Jensen. “Fourteen years and change is a long time,” Jensen said. They never believed the show would continue this long. And he’s very thankful that it didn’t. “It’s been quite a ride. It’s hard to express what we’re going to take away from that.”

11.07 – Misha explains that the year before he started SUPERNATURAL he had written on a “goal card” that he wanted to get a regular spot on a TV show and to become life-long friends with his cast members and he’s shocked that it came to pass. “I know none of you like me,” he joked about his co-stars. “But I could never have dreamed that along with [this experience] would come this incredible fandom. It feels like a great honour to have been a part of it.”

11.09 – At the end of last season, God wasn’t very nice to Jack. Where is he going to go this year? Alexander says that Jack will obviously be back in some capacity. “Jack’s journey and my small part on this show has been truly incredible. I’m excited to see this journey come to an end.”

11.11 – Singer said that when you cast these shows, you might find two great actors who don’t have “magic in a bottle”. But Jared and Jensen had chemistry right from the jump. He said when Eric Kripke left the show “he left us with a lot of good things.” All of the showrunners that came after stepped into the role as “good as possible”.

11.14 – What about God? He’s not the nice guy he once was. Buckner said the final moment of the season finale “was one of the biggest game changing moment we’ve had on the show”. There used to be an assumption about God that he was absent. The boys were willing to accept a God that was hands-off. But this changed everything. Now we have a God that never left the building, but was manipulating from the shadows. This messes with your entire belief system. Now everything changes because you can’t accept what he used to tell you. Ross-Leming says you’re living your life on quicksand because you don’t even really know if you have free will anymore. “We’re playing with each other as writers to figure out what it really means”. She says they’re going to try to take chances they didn’t really have before. But this idea of God manipulating the world seems to be a big theme for the year.

11.17 – Berens says what’s really important about the Chuck reveal is the issue of free will. Sam and Dean will respond very differently to this concept now that Chuck has basically revealed it’s all nonsense. They did save the day many times, but they have to reclaim the victories of their past and say “this was us, we did have free will. That dynamic will play out throughout the season.”

11.20 – When asked by a fan if there’s anything they want to do for the final season that they haven’t done yet, Jared says they would always joke in the last 307 episodes that it would be funny to go to a beach in Maui, or do laundry in their underwear in a laundromat. But really there’s nothing he wants to do that he hasn’t done yet. “I’m just honoured and humbled I’ve been able to do so much already.” But Jensen thinks they should “take the Impala to the track. Win a little spending money for the boys. Maybe go to Cabo and get trapped in a foam party.”

11.25 – “Looking back I’m really proud of the work that this team has done for so long. To make television isn’t as easy as people might think,” Jensen said. “It takes a lot of very talented people to give you guys the best product that we can make. I’m really proud of that product. After this long on a show, to still truly love what we do and to be able to hang my hat on that at the end of the day, I’m really proud to know that I put in the effort. No one phones it in here.”

11.27 – Misha jokes that he has plans to take things from the set. He’s already rented a semi truck and he has a cage “in which I will put Jared and Jensen.” He also hopes in the future that “this fandom continues to function as a family after the show is over. That you guys continue to be a force for good and companionship in the world. I think it’s a family that’s not going to go away just because the show goes off the air.”

11.34 – Final thoughts as they say goodbye to Hall H for the last time? Singer say he’s a latecomer to Comic-Con. But he’s been coming for the last 3-4 years and it’s occurred to him how much he’s missed. Doing this show has been a remarkable experience. “The show will end, but the friendships and the memories we’ve all had together [will endure].” Dabb says that it’s been an incredible privilege to work on this show and it’s something most of them will never experience again. Misha says they were all backstage promising each other that they weren’t going to cry “but we all knew that we were lying to each other. Love you guys!”. Jensen says “thanks for showing up. Without you, we wouldn’t be here. It’s an amazing thing to see, this many faces who appreciate what we do.” Jared says that he’s the luckiest man on the planet.