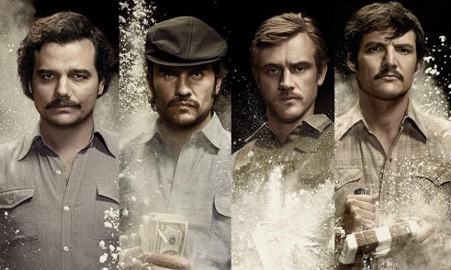 Ever since Netflix released Narcos in 2015, fans have been going crazy about this historical drama that tells the story of the late 1980s Colombian drug cartels. The plot is centered around the Medellin Cartel and its leader Pablo Escobar, and if you haven’t started already, here are the top 8 reasons to start binging all three seasons of the show.

It’s Based on a True Story
Many drug crime dramas have reached immense popularity in recent years, but most of them were not based on true events like Narcos is. The storyline is inspired by the real history of the Medellin drug cartel, telling you all about how Pablo Escobar is the person responsible for bringing drugs to America. The show’s authentic story is supported by the real news footage, including the clips that show Pablo Escobar himself.

The Amazing Portrayal of Pablo Escobar
Many modern-time television characters loved by the masses fall into the antihero category, and although Escobar is actually closer to being a villain, he was adored by many people in his society, especially the poor ones. When it comes to the tv character, the actor Wagner Moura did an amazing job portraying the famous drug kingpin as a multi-dimensional character with a charismatic personality. The actor who is actually Brazilian and did not even speak Spanish before taking on the job had to spend five months in Colombia in order to learn the language and prepare for the role. Moura’s acting was also rewarded with a Golden Globe nomination.

It Inspired Exciting New Games
The show gathered such a large cult of following that it also inspired a number of new games, and if you love the games you can find at SuperSeven online casino, you will love the show as well. On the other hand, if you’ve already seen a few episodes of the show and you’re looking to experience more of the theme through fresh content, you can find Narcos-inspired slots at SuperSeven online casino.

The Story is Finally Told Right
Although this is not the first time someone is bringing the story of Pablo Escobar on tv, this is the first American show that tackles it. His life was presented in Escobar: Paradise Lost, the movie from 2014 where the main character was portrayed by Benicio del Toro, but as it happens due to the time constraints that come with movies, the mere two hours were just not enough to tell the gripping story in detail. With thirty episodes aired by Netflix, Narcos tells every single interesting fact about the life of the infamous Colombian drug lord.

The Quality of Music
Besides the gripping plot and fantastic acting, Narcos also features amazing soundtracks done by Pedro Bromfman. Bromfman is a Brazilian musician and composer who was also in charge of the music prepared for Elite Squad and Elite Squad 2, which is the highest-grossing movie in the box office history of Brazil.

The Intrigue Behind Pablo Escobar
Despite the fact that Escobar is a loathsome figure, there is a certain hype around him in pop culture. People love hearing about the intriguing life of the man who kept a large portion of Colombia in his hands and managed to get on the Forbes International Billionaire’s list by being involved in notoriously illegal trade. Escobar is not only seen as a criminal but as a person who disrupted the entire industry by introducing cocaine to the Colombian market.

It’s More Than a History Lesson
The fact that the show is inspired by true events does not mean it’s just listing events in a form of a documentary. Narcos presents Colombia in the 1980s which is far from a boring history lesson, and the entire content is created with the intent to keep the viewers intrigued, whether they like history or not.

The Saga Continues to Narcos: Mexico
Fans of the show largely agree that the most recent continuation of the series titled Narcos: Mexico managed to maintain the standard set by the first three seasons. However, Narcos: Mexico does not deal with the life of Pablo Escobar. It presents the story behind the rise of the Guadalajara Cartel and its leader Felix Gallardo, as well as the effort of the American DEA to suppress the clan’s power. The new show provides the viewers with a delicate balance between the two sides, and fans often find themselves rooting for both the DEA and the clan members when they attempt to escape punishment.

If you are a fan of intense drama and thrilling action, Narcos and its continuation Narcos: Mexico are not to be skipped. Now that you know all the cool facts about the show, it’s time to launch Netflix and start binging your new favorite series.