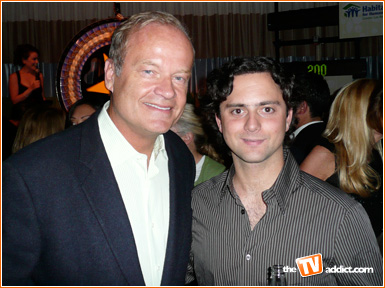 On Monday night, the TV Addict attended his first ever Hollywood Party. By all accounts I played it cool, suave and sophisticated. Breezing through the room like I belonged. Not at all like the television obsessed stalkarazzi who casually took it upon himself to interrupt nearly every actor and actress within earshot to get a quick photo.

But seriously, who am I kidding — suave and sophisticated? Not a chance! This TV Addict was at a party with Kiefer Sutherland! [You may have read about it here, here and here.] And no, contrary to online speculation, I did not drink Kiefer under the table. THE OFFICE’s Kate Flannery, well that’s a different story entirely.

The party at AREA [an uber-trendy club you may have seen on THE HILLS] was everything you’d imagine. Stars where everywhere [I quite literally almost bumped into Emily Deschanel], very strange food [Shrimp pizza? what’s wrong with regular pizza!] and did I mention the stars?

Enjoy the first round of photos, including my ‘what I did say’ vs. ‘what I wanted to say’ comments. I’d post my Kiefer Sutherland photo but I’m shopping them around [US Weekly, People Magazine.. I’m waiting for a call!].