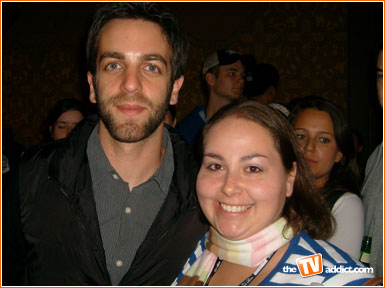 Hey gang. First things first, I want to apologize for no updates this morning! I was in my hotel room for a total of 5 hours between Saturday morning at 9AM and Sunday morning at 7:30AM. I was out and about in Scranton; various Q&As, walks around town, taking in the local sights, meeting up with cast members and writers, and chatting with fellow bloggers.

Some Friday things to take care of – Craig Robinson is and always will be my favorite. Darryl is awesome. At the end of Casino Night, he was still okay with getting one last picture in. Also – I chatted with Ed Helms for a little while about our interview from over the summer. He is not cousins with Wes Helms. He just didn’t want to correct me back then ha! He was a gem, and I cannot believe I had the luck of not only standing near him, but getting to stand with his arm around me for a darling picture on my phone.

Saturday morning was horrible, weather wise. It was pouring. Pictures in the pouring rain was not an easy task. The Office was playing all over town, so I got the chance to catch up on old episodes. Ended up at the Steamtown Mall for the Uncommon Stakeholder’s Meeting. Craig (Darryl, my absolutely favorite person ever), Oscar, and Andy Buckley (David Wallace, CFO) participated in a mock board meeting. Craig was hilarious, Oscar and Andy were, too. It was packed.

From there, we headed to see Creed play with the Scrantones in the middle of the University campus. You know those stories Creed comes up with on the show? He does it in real life. He let us know that when he was a child, he was orphaned, and then adopted by a Chinese family and long story short, that’s how he lost a toe (I’m pretty sure he made that up…though I did hear him tell that story twice). He may tell crazy stories, but his guitar playing is phenomenal!

Next up, I headed in to a press conference for the cast and Greg Daniels. They answered questions about their characters, what they have going on outside of the office. On one side of the coin, Melora Hardin seems busiest as she is a singer/songwriter and has a CD out and she’s got some movies going on. One lucky TV addict reader will win a signed Melora Hardin CD – Just post below with your favorite Office moment, or your favorite Office Convention moment! Winner chosen at random! She’s got a killer voice and she’s stunningly beautiful! On the other side of the spectrum, Andy Buckley is literally a stockbroker by day! He goes back into the Merrill Lynch office Monday morning to get back to his day job! The other cast members have various things happening, but hey all seem pretty focused on The Office right now.

Biggest piece of information to offer from the press conference – Greg Daniels says that he is in the process of getting Stephen Merchant (the other half of the creative team behind the Original Office in the UK) to direct the holiday episode this season! How awesome is that?

At the end of the press conference, to sum it up – Craig Robinson is funny no matter what he’s doing. Ed Helms is so delightful. The rest of the cast? As amazingly likeable as possible. 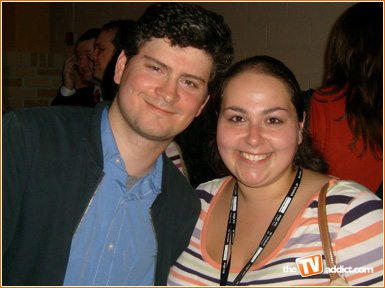 After the press conference, it was time for a Q&A with the cast for everyone else that was at the convention. The gym we were in was huge; I think heard that we were at capacity with 3500 folks in the bleachers. Ed Helms sang many songs at the request of the audience – Rainbow Connection, Take a Chance on Me (Kate Flannery, Creed, and Melora provided the backup vocals). The entire time, the cast looked happy to be there, thrilled to be a part of something so awesome. And Leslie David Baker (Stanley) had a smile on his face the whole time!

After the Q&A, we headed out to the local youth center for a VIP cocktail party. I got the incredible opportunity to meet and chat with Mike Schur, the writer who plays Mose (pictures at the end of the write-up.) It’s nice to know that he’s not above making a short joke to someone he’s just met. The cast was supposed to be downstairs in the “lounge” with the VIP folks but got delayed, so instead everyone headed upstairs to see the Scrantones perform. Cast members got up on stage to play – Kate, Creed, Eddybaby – Ed Helms (he did “Werewolves of London” but sang one with lyrics dedicated to the “Werewolves of Scranton”), Melora (she sang “Buttons” by the Pussycat Dolls), Craig (again, and I am rocking a huge crush on him right now), and Brian (he did Roxanne by The Police). It was truly amazing. The entire cast was there to support each other and sing and dance along. At the end of the concert when The Scrantones played the theme song, the cast came out and danced and jumped around. Eddy-baby picked up a guitar and Kate started playing the piano. It was just an all out good time. You could tell the cast was loving it! 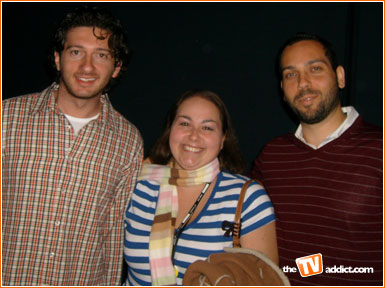 After that, it was time to get a few drinks at the local Irish Pub, Molly Branagan’s with some new friends. Did anyone else that was there (local Scrantonites, let me know if I’m wrong on this) notice that just about 90% of the women there this weekend smoked? (that’s for you guys JJ, Juice, and Keith!) I don’t have anything against it, I just thought that it was a higher number than I’m used to. And maybe it’s just because our town has gone smoke free, so I was exposed to it more…Maybe I’m just crazy?

After MB’s we headed to a great diner on the way back to the hotel, Chick’s. There were some awesome locals there; it was nice to get to see a little of Scranton that wasn’t covered with convention folks. 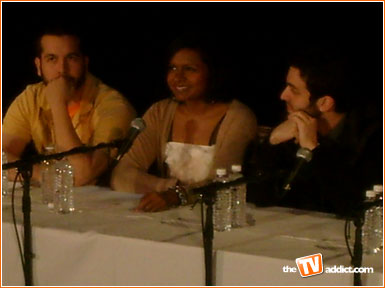 Today was all about Q&As – Blogger’s breakfast, where Brian and Bobby Ray talked about their blogs on Myspace and why they do it. Then Kate showed up and talked about her TVGuide blog. I asked the fellow bloggers if it felt like the stigma against blogging was going away, and they seem to be in agreement that it is. Fingers crossed!

After that, it was time for what had to be my favorite part of the whole weekend, the panel with most of the writing staff. Greg Daniels, Lee Eisenberg, Mike Schur, Jennifer Celotta, Justin Spitzer, Gene Stupnitsky, Jason Kessler, Mindy Kaling, BJ NOVAK (it wasn’t a huge surprise, but it was awesome that he showed up), among others, and the coolest of the cool, Kent Zbornak (dude walked around all weekend just chatting people up. It was amazing). Sadly, Paul Lieberstein (Toby) couldn’t make it!

They had such a great amount of stuff to say, most notably about how great Scranton is compared to where they actually shoot in Van Nuys. They’ve considered shooting a few scenes in Scranton over the years, but haven’t bitten the bullet yet. They also talked about all kinds of little things around Scranton that they want to incorporate into the show. What I thought was great about it was that Greg Daniels asked for audience advice, and wanted the audience involved in the Q&A.

We then were lucky enough to see Act 1 of this week’s episode, titled “Branch Wars,” written by Mindy Kaling. It reunites The Office with Rashida Jones’ Karen Fillipelli. It was laugh out loud funny – there are some fabulous Stanley moments and everyone seemed happy with it. You do not want to miss it!

After that, there was another VIP cocktail party. This time we got some quality face time with the writers. Jason, Lee, and Gene were just awesome. Lester was great too.

I headed home after that, and I’m about ready to crash.

I want to take a minute for a person hi to Tom, Kelly, and Chris who let me bum around with them Friday. To you, I say “there’s no next month, there’s no next year. There’s only the here and now.” Also, a big “hello” to JJ, Keith, and Juice for Saturday fun times, Chick’s and syrup-water, and hot pockets!

And now what you really care about, the pictures! 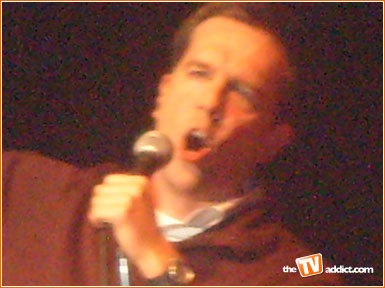 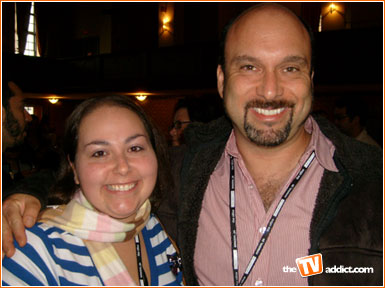 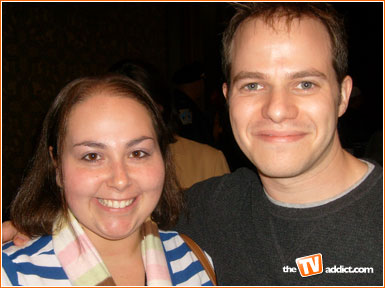 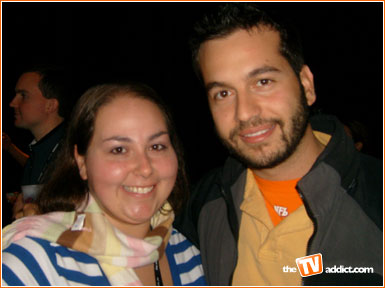