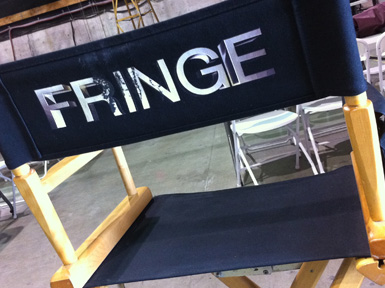 As if being given the opportunity to interview John Noble, Blair Brown, Jasika Nicole and Lance Reddick wasn’t cool enough, on our recent August set visit to the set of FRINGE we were given the once-in-a-lifetime chance to play an extra in a scene. The following is our harrowing brush with Hollywood fame*

2:30PM: A shuttle bus arrives at our hotel to take us to set. Yes, you are reading that correctly: A shuttle bus. Evidently, our acclaimed appearance as “Audience Member #24” in the first season of GLEE didn’t warrant an upgrade to SUV or Limo. Rest assured, our Agent will be getting a call later in the day.

3:00PM: We arrive and are immediately asked by publicist extraordinaire Josh Governale not to tweet any particulars about the scene we’re about to shoot. Needless to say, asking a group of TV journalists and bloggers not to tweet about every minuet detail of their life is far easier said than done. Also easier said than done, controlling ourselves around the ridiculously delectable breakfast buffet that has been set up mere feet away. Seriously. How Anna Torv does it we’ll never know. 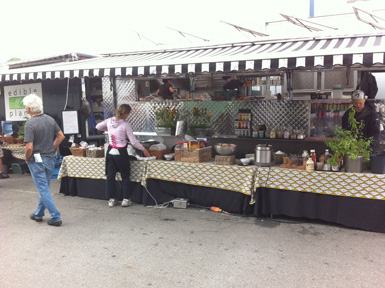 3:15PM: The plate of strawberries that we’re begrudgingly calling ‘breakfast’ is interrupted by the proverbial powers that be who require us to sign a waiver before we appear on camera. Never one to read the fine print, it’s possible Rupert Murdoch may own our first born. We’re just sayin’

3:30PM: First stop following our ‘breakfast’ was wardrobe. As luck would have it, the blue-striped shirt and black jeans that we may-or-may-not have picked up off the sale rack at H&M (Note to Readers: Please take a moment to click on an ad or two on the right, we just might be able to afford Banana Republic next time!) was more than suitable to fit in as an employee of Massive Dynamic. Unfortunately, a few of our journalist/blogger cohorts weren’t so lucky and were asked to don multiple outfits to, as they say in the biz, “Make it work!” 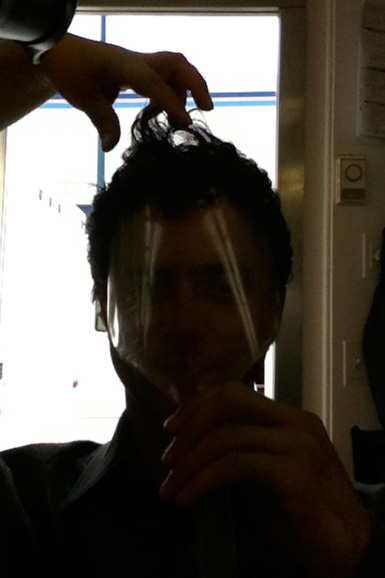 4:00PM: Next up was the Hair & Makeup department, which everybody who is anybody knows is the information hub of any set. So just what intel did the lovely ladies tasked with making us look fabulous spill? Sadly, aside from the fact that everybody on the set of FRINGE is a total class act — transportation were the people to talk to get the real scoop as they apparently know all. 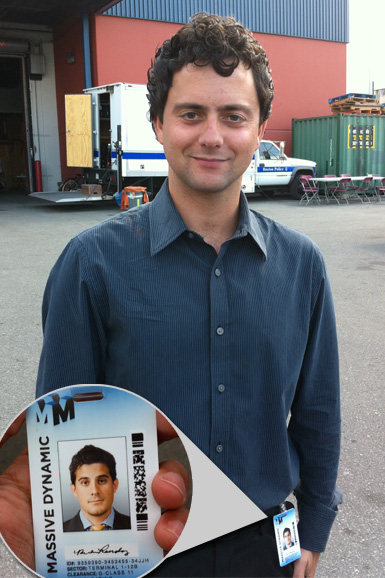 4:10PM: As high definition television quickly becomes ubiquitous throughout living rooms across the world, no attention to detail is too small. Which is why our costume and make up experience was topped off with the pièce de résistance: A Massive Dynamic security card. Bad News: Not quite separated at birth!

4:30PM: Waiting around for our call time, it’s hard not to marvel at what this FRINGE creative department managed to do. Transform a group of slightly nerdy journalists and bloggers into even nerdier scientists. Suffice to say, we’re ready for our closeup Mr. Demille.

4:45PM: Our marching orders arrive from an Assistant Director and it’s not good news. Turns out, there is not enough room in the scene to physically accommodate all of us (Damn you breakfast buffet!) Which means for the first time in the history of the world, being a white man is totally not going to pay off! No really. Looking around at my fellow journalists/bloggers and real-life extras one can’t help but conclude that we’re at a serious disadvantage when it comes to filling the hallways of Massive Dynamic with an ethnically diverse group of people. We’re not a smart asian scientist, an older bearded businessman or a beautiful woman who has that whole sexy James Bond “Scientist in a lab coat” thing down pat. What we are, is screwed!

5:15PM: After making peace with the swift way in which our Hollywood career came to an end and convincing ourselves that being in a scene with John Noble, Blair Brown and Joshua Jackson probably wasn’t as cool as our imagination made it out to be, the Assistant Director returns to say that he’s in need of one or two more extras. Recognizing that we have about three seconds to make a good impression, we quickly nudge that pesky Damian Holbrook of TV Guide Magazine fame aside and [politely] holler, “Massive Dynamic could use a younger slightly nerdy techie!” And as luck would have it, they did.

4:15PM: Doing a really poor job of containing our excitement, we wave a fond farewell to our journalistic co-horts, promise that we won’t forget the little people like that guy from TV Guide Magazine whose name has already escaped us and head to set. What set you say? Well, as publicist extraordinaire Josh Governale already pointed out, we’re not about to ruin the surprise surrounding tonight’s episode. Except to say that being an Extra on a set is an absolutely terrifying experience. Particularly when you’re instructed to react, but not look like you’re reacting. Show surprise, but not too much surprise. And for the love of God — whatever you do — try your best to keep a straight face when John Noble does the unexpected.

4:30PM: Seven or eight takes later, we can’t help but be impressed by the [for-lack-of-a-better-word] sheer awesomeness that is John Noble up close and personal. The amount of energy, thought and astounding ability to simply transform into Walter Bishop the moment the director says “Action” truly has to be seen to be believed. In fact, the only downside to our experience as “Extra,” aside that is from the fact that we weren’t the “Scientist” picked to hold the iPad, was the tedious nature of the job. Sitting around for take after take while ensuring our reactions remain fresh isn’t easy. We would say Katherine Heigl may have been on to something when she was complaining about those 17 hour work days earlier in the year…. until it occurs to us that if we were getting paid what Heigl was getting paid, you couldn’t knock the smile off our face.

5:30PM: Our scene comes to an end. The only question remaining is whether or not it will end up on the cutting room floor. Tune into tonight’s brand new episode of FRINGE at 9PM on FOX (CityTV in Canada) to find out. We sure as heck will be!

* All times are approximate as a result of some missing notes.