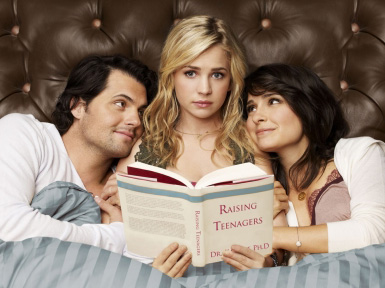 This just in: With Deadline Hollywood breaking the disappointing, albeit somewhat expected news late last night that the CW has opted against picking up LIFE UNEXPECTED for a full 22-episode second season, it has officially not been a good Fall for TV Addict favorites (See: LONE STAR, LIFE UNEXPECTED and [soon-to-be] RUNNING WILDE).

That said, rather than wallow in self-pity for the latest in a long string of CW shows that we’ll no doubt continue to point to for years as examples of what could have been (see: EVERWOOD, JACK & BOBBY, GROSSE POINTE), we thought we’d do something constructive by providing you with actual answers to some burning questions that have been flooding our inbox since late last night. Just what does LIFE UNEXPECTED’s failure to get a back-nine mean for your (and our) favorite little-show-that-unfortunately-couldn’t? Here’s what creator Liz Tigelaar had to say when we pre-emptively posed a few questions to find out just that during our recent one-on-one.

“Basically put it this way, if we don’t get a back nine, 13 will be our last episode of the series,” explained Tigelaar, who even as far back as September sounded as if she knew deep down the writing was on the wall. “The CW is not going to only pick up 13 and then pick us up again next year, or at least I doubt.”

Translation: It’s over. With the only question truly up-in-the-air being just how will it end?

“Obviously if you were doing the end of this story, what I feel the fans want are Cate and Baze together, so that would be a natural series end in someway,” said the show runner. “Unfortunately, that is not going to to happen by episode 13, at least I don’t think in an artful way. So we’re just going to hope for more and if 13 ends up being our last one we will have some closure, it will feel good and the end, but it won’t be the true end.”