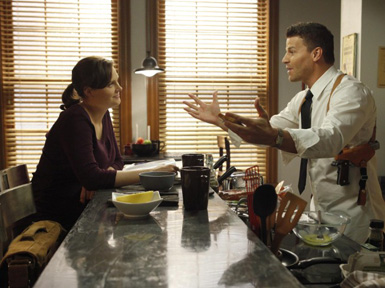 It was the five words that changed everything. “I’m pregnant. You’re the father.” Six if you count the fact that in delivering the news, Brennan stammered, repeating the word “I’m” twice. And in the wake of that stunning announcement in the not-so-subtly named sixth-season finale of BONES (“The Change In The Game”), fans were left to spend the entire summer adjusting to the idea and reacting to the realization that the passion they’d waited ages to see consumated had been… off camera.

They were also left to wonder if perhaps the unexpected twist would have even taken place in the first place had Brennan’s alter ego, Emily Deschanel, not found herself “in a family way”, as grandma used to say. Regular readers will remember that way back in November of 2010, the show’s creator, Hart Hanson, told theTVaddict.com of a plan to “replace the unrequited sexual tension between two people with something else of equal power.”

As often happens in real life (ask any of the girls on MTV’s TEEN MOM), babies cause folks to look at their lives from a different perspective. And the news that his star was expecting caused Hanson to reconsider the path down which Booth and Brennan were meandering. So exactly where would that original path have taken them? “It would have been a reflection upon the idea that just because you sleep together doesn’t mean you’re with each other,” reveals the exec. “Booth and Brennan would have had another step to go, which is, ‘Are we together?’, and that gave me agita. The notion of just seeing their relationship through them having a baby changed everything. We had to scrap any ideas that we had for this season and replace them, but it’s just better,” he says, adding that fans will be able to judge for themselves when the show returns to FOX on Thursday, November 3, at 9PM. “I don’t think that is a rationalization. I actually think it is better.”

BONES returns this Thursday November 3 at 9PM on FOX (Global TV in Canada) and stars David Boreanaz, Emily Deschanel, Michaela Conlin, T.J. Thyne, Tamara Taylor and John Francis Daley. Catch up on past episodes you may have missed for free online at clicktowatch.tv