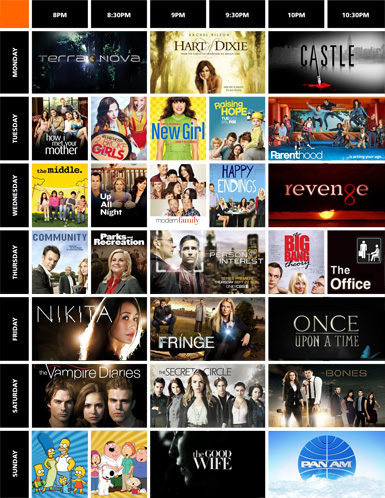 So many shows, so little time!  Is it wrong to love “the competition”?  With so many fun TV shows competing against each other in the same timeslots each night, it is enough to make any TV viewer extra-fatigued trying to find creative ways to watch everything.  Then there is the haunting feeling that you are “cheating” on all the other shows by picking one to watch LIVE versus the rest that are being recorded via DVR or time-shifted.  In addition, each week it can change night-by-night as the each show vies for our attention, pressuring viewers to be the one that they choose to spend their precious time with.

As an entertainment commentator and reporter, the decision of what to watch can be dictated by who I may be interviewing the next day or which shows I need to stay current with in order to be prepared for upcoming articles and deadlines.  For the average viewer, the decision may be swayed by special guest appearances, promised big moments, or a teaser preview that made the episode so mouth-wateringly tantalizing that they have to watch it was soon as possible.

With the availability to time-shift or watch TV shows online or on DVD, the need to watch every show LIVE has become obsolete.  For some savvy viewers, they never watch TV shows LIVE anymore.  They have found so many alternative ways to watch the shows they are interested in, that the concept of watching anything in “real time” is ludicrous.

But I know that I have a distinct feeling that I am “cheating” every time I switch the channel or decide to watch a show that I’ve previously recorded, while another one of my favorite shows is recording.  But should we feel so distraught and guilty?  With the availability of all the technology and alternative means to consume our entertainment, it should be presumed that we are merely exercising all the options.

It is just that television networks and studios are still stuck in the past and ignoring the fact that television is no longer about predetermined timeslots anymore.  In fact, if Hollywood were to actually look around, they’d see that television is much more flexible than ever before.  They are just two decades behind the times.  As my friends at TVgoodness are fond of saying, “it’s time to get with the program.”  Why is Hollywood so attached to the old format of primetime and Nielsen ratings?  Just as the technology has changed, the way viewers are watching television has changed.

As the Super Bowl just proved, there are over 100 million American television viewers to tap into.  With over 100 channels now competing for those 100 million eyeballs, the broadcast networks are scrambling to find television shows that will carve out a piece of the available pie.  But they are constantly forgetting that the available 100 million is strictly for Sunday viewing – when most people are not working – and it was for a very special occasion.  The average football game pulls in less than one-half of that amount.

Being conservative, in theory, there is an average 45 million available viewers per night (Sundays through Thursday – you can’t count Fridays and Saturdays as the long-held tradition of “date night” is just something that television cannot adequately compete with).  With only 45 million to divvy up, the 100 plus channels are having to strain all their resources to get a “piece of the pie.”  Is it any wonder that between Fox, CBS, ABC, NBC and the CW, they are struggling to retain a significant chunk?

Let’s run some sample numbers: Tuesday nights at 8 pm, there is NCIS which will carve out 20 million, then there’s GLEE which usually grabs another 9 million, LAST MAN STANDING pulls about 7 million, NBC’s THE BIGGEST LOSER draws 6 million, and the CW’s 90210 about 1.3 million.   That totals about 43.3 total viewers — with a number of viewers venturing to other networks to check out ABC Family’s SWITCHED AT BIRTH, A&E’s STORAGE WARS or Food Network’s CUPCAKE WARS.

Once you change your thinking to the “pie” concept, it is pretty easy to estimate how new shows are going to fare.  Just look at what it is competing against in its assigned timeslot and you too can guess how many viewers will be available to check it out.  Like with the debut of ABC’s THE RIVER.  It was up against NCIS: LOS ANGELES (16 million), NEW GIRL (7 million), THE BIGGEST LOSER (7 million) and RINGER (1.2 million), with a number viewers tuning their channels at 9 pm to watch SHIPPING WARS (2 million), HARDCORE PAWN (2 million), DANCE MOMS (2 million) and the darling teen series JANE BY DESIGN (1.3 million).  Was there ever going to be more than 7-8 million available viewers that THE RIVER could carve out?  Not in this tough timeslot.

Everyone is citing NBC’s new series SMASH as a great example of securing a large viewership, but when you analyze its timeslot, it merely picked up what was available.  SMASH airs Mondays at 10 p.m. up against CASTLE and HAWAII FIVE-0.  Typically, viewership declines for the 10 p.m. timeslot as viewers, who have to get up early for work the next day, go to bed.  So instead of the 45 million “pie,” it now drops to about 30 million.  With CASTLE and HAWAII FIVE-0 each claiming about 10 million viewers each, that only leaves about 10 million available viewers.  So SMASH debuted at 11.5 million, with CASTLE drawing 9 million and HAWAII FIVE-O its usually 10 million.  Headlines were quick to proclaim SMASH an instant hit, but really, that was the expected number of viewers it was supposed to draw.  That was the available number of viewers.

You can look at the 8 pm timeslot on Thursday nights and also see pretty quickly what several shows have dropped in viewership.  AMERICAN IDOL is taking 20 million, THE BIG BANG THEORY takes another 16 million, WIPEOUT pulls 6 million, leaving 30 ROCK to draw 3 million and THE VAMPIRE DIARIES at 2.7 million; for a grand total of 44.7 million viewers (not counting those who found alternative networks to watch).  Even back in November when AMERICAN IDOL was not around to squash all that is within its path, the numbers did not weight in certain shows’ favor.  THE BIG BANG THEORY still took the majority of viewers at 16 million, THE X FACTOR carved out 10 million, the now-cancelled CHARLIE’S ANGELS had 5 million, COMMUNITY scored 3.5 million and THE VAMPIRE DIARIES was at 3.3 million; for a total of 37.8 million.  I can’t imagine that SWAMP PEOPLE or SPONGEBOB siphoning off the remaining 7 million viewers; it was more likely that the football season was luring viewers or that the rapidly approaching holidays were curtaining television viewership.

While both networks and studios are quick to dismiss the “pie theory” way of determining whether TV shows are going to succeed or not, it is a pretty simple way for the average viewer to ascertain what is going on with ratings and why their favorite shows are not making it.  If the show is in a tough timeslot with too much competition, there just is not enough available viewers.

It also is a quick and easy way to see why new shows like TERRA NOVA, ALCATRAZ, THE FINDER and THE RIVER are plateauing at the 7-8 million mark.  That’s all that’s available.  SMASH got lucky as it had less competition and was able to draw 11 million.  The same thing is true with ONCE UPON A TIME – there was just less competition in its timeslot (though that may change once HARRY’S LAW moves into the same timeslot to compete in March).

Even former juggernauts like AMERICAN IDOL and SURVIVOR are seeing significant drops in viewership.  Everyone is spouting theories like “viewer fatigue” as to why these former bullet-proof shows are flagging.  But the “pie theory” works pretty well too.  More competition explains a lot.  Each show is carving out its niche of viewers and holding on tenaciously.

Also eating into the “pie” is the competition from Internet viewing.  Due to the increased number of shows that viewers want to watch — and the readily available alternate ways to watch TV shows (via the internet or DVD) — TV shows are also competing with new technology.  Viewers, who are stressed about two or three competing shows, are juggling how they view television.  They are exercising their right to use DVR’s to time-shift and record shows for later viewing and they are flocking to the Internet to watch shows on iTunes or network sites to catch shows they missed or could not squish onto their DVR’s.

Television cannot be measured by timeslots and Nielsen viewers anymore.  That is not how viewers are watching television.  It is time for studios and networks “to get with the program” and step into the modern era.  Appointment television is a thing of the past.  Now it’s all about counting the viewers who time-shift and who watch shows online.  It is time to count all the eyeballs equally and stop prioritizing LIVE viewers – as if a person watching TV at 9 p.m. at night is more likely to buy a product than one who watches at 6:00 p.m. the next day on their DVR or online.  In fact, there is an argument to be made that those who watch online (who are forced to watch the commercials without the luxury of fast-forwarding) are a more captive and engaged audience.

The television landscape is changing.  It is not all about watching on an actual television anymore and it is not about watching during pre-set primetime hours anymore.  How viewers watch and consume television has dramatically changed — and networks/studios need to adapt or die.