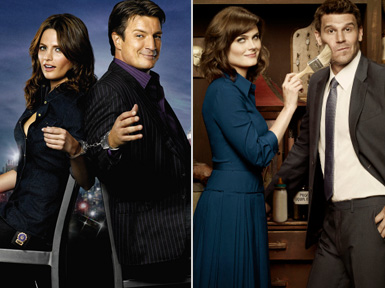 In Hollywood, there is no more dreaded catch phrase than “The Moonlighting Curse.”  For those old enough to remember, MOONLIGHTING was the hot comedy-drama of the 1980’s, starring Cybill Shepherd and Bruce Willis.  The show consistently scored high ratings until one disastrous night – its core characters David and Maddie slept together at the end of the show’s third season.  After achieving its highest ratings ever, it was all downhill from there – at least in the ratings.  It went from 9th place the Nielsen list to 14th  place during its next season, and then was cancelled after limping through one more final season.  Ever since then, shows that are dependent on the “will they or won’t they” hooks to their premise tend to religiously avoid killing the cash-cow and make sure their hot couples never get together, or to postpone it as long as humanly possible (such as waiting until the series finale).   The thought being that popping the “romantic-tension bubble” spells doom for any television show.

Yet, there were a combination of factors that are conveniently forgotten when alluding to “The Moonlighting Curse.”  For one, Cybill Shepherd was pregnant with twins that following season and was unable to work as much as she had before.  In addition, there were cost and scheduling overruns that made the show extremely expensive.  So the show was headed for trouble whether or not its characters ever slept together and became romantically involved, simply due to a collision of outside factors.  Yet all the audience remembers, and which is now a part of Hollywood lore, is that popping the “romantic-tension bubble” will kill a show.

So for the past two decades, everyone has shuddered to imagine what would happen to a TV show if a show allowed its principal couple to take their relationship to the next level.  Daring to flip-the-bird at the alleged “curse,” showrunner and creator Hart Hanson allowed his show’s core characters of Brennan and Booth to consummate their relationship and have a child together on BONES.  It may have seemed risky, but with BONES heading into its 7th season, the risk was nominal.  Its core fanbase and popularity was rock-solid.  In fact, the ratings barely registered a blip as a result.  (Though the recent move to Mondays has put the show in the ratings spotlight as it is so much harder to secure an audience on Monday nights versus Thursday nights.)

Despite Hart Hanson’s fortitude and willingness to “go there,” not every show currently on television is ready to tackle the “curse.”  One good example is the detective series CASTLE.  (It is also noteworthy that BONES airs on Fox, whereas CASTLE airs on ABC, the same network that MOONLIGHTING was broadcast – perhaps explaining why it feels so gun-shy about the “curse.”)

On CASTLE, for the better part of four seasons, the show has danced around the romantic-tension between Detective Kate Beckett and Richard Castle.  The dance has been fantastically drawn-out and has left fans panting with anticipation.  So much so that last season, in an episode where Detectives Ryan and Esposito were kidnapped, Beckett and Castle posed as a couple on a date and shared a passionate kiss.  Better make that two passionate kisses.  Re-watch that scene, you’ll see exactly what I mean!  (See my article “A Kiss Is Never Just A Kiss”)  Anyway, that kiss and the lingering tension finally culminated in last season’s finale with Castle declaring his love to Becket when she was shot by a sniper.  So when the show returned for its fourth season, fans were anxious to see how Beckett would respond.  But for the better part of this current season, all those feelings were left unsatisfied and unresolved as Beckett proclaimed that she did not remember anything after she was shot that fateful day.  It was not until the recent episode “47 Seconds” that we found out that Beckett had lied about that.  She remembered everything and had not said a word to Castle.  Once Richard Castle found out that she remembered his declaration of love but had never said anything, he felt embarrassed and a fool.  He had continued loving Kate while she had tried to pretend that his declaration had never happened.  It has forced the characters to veer off in wildly tangent directions as Castle attempts to move on in his life, which Beckett has noticed and may be attempting to move on herself. The characters seem to be moving on – or are they?

Rumors have abounded. The cast and creator Andrew Marlowe have teased. Previews have shown Beckett regretting not telling Castle sooner that she knew he loves her. Will there be a final culmination of the détente of “will they or won’t they”? Will it finally end? And if it does, will it be a ratings “death knell”?

20 years has passed since the demise of MOONLIGHTING.  Isn’t it time to stop fearing the myth of such an old “curse” when characters come together romantically?  In the intervening years, so many more shows have avoided the “curse” by simply having their characters connect romantically right away.  One good example is USA Network’s BURN NOTICE.  From the very first episode, Fiona and Michael have been a couple and it has only fueled the fiery passion of both the series and the fans’ amorous love for the show.  Frankly, BURN NOTICE would have suffered greatly but for the sexy hot relationship of Michael and Fiona.  Another USA Network series that has not hesitated to taunt the “curse” is PSYCH.  In a fun turn of events, in the show’s fifth season, it allowed Detective Juliet O’Hara and fake psychic detective Shawn Spencer to have a romantic relationship, which delightfully continues through the show’s sixth season. In fact, a large number of today’s current television shows have avoided the “curse” successfully and have allowed their characters to enjoy wonderful romantic relationships, such as COUGAR TOWN, WHITE COLLAR, NIKITA, GRIMM, FRINGE, THE FINDER, THE SECRET CIRCLE, GREY’S ANATOMY, ROYAL PAINS, GLEE, LOST GIRL, GOSSIP GIRL, PRETTY LITTLE LIARS, HOUSE.  Even shows like THE GOOD WIFE and ONCE UPON A TIME have briefly allowed their core characters a chance at happiness.

The old adage that for “will they or won’t they” type shows that they will wither and die should they burst the “romantic-tension bubble” seems to be crumbling and falling by the wayside as more and more television shows are discovering that audiences and fans are more than willing to allow their favorite couples to explore romantic love.  After all, what is more intoxicating than watching people who are in love?  Looking across the television landscape, there seem to be more shows than ever before that have broken the “curse.”  There is love blossoming all around.

While there will always be a few hold-out shows that are fearful of “The Moonlighting Curse” and who continue their dance around their core couple (HART OF DIXIE, JANE BY DESIGN, COVERT AFFAIRS, THE VAMPIRE DIARIES and SUITS), we remain hopeful and confident that the day those show’s writers decide it is time to take the leap that we will be on the other side to catch them.

Until then, rest assured that the “curse” is only as powerful as writers chose to believe it is – for as ONCE UPON A TIME has taught us, “true love’s kiss” can break any curse.