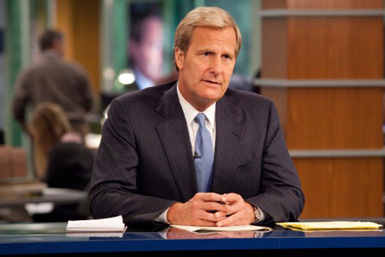 While we’re the first to admit that we’re having trouble containing our excitement surrounding Aaron Sorkin’s return to the medium where he belongs thanks to this weekend’s premiere of THE NEWSROOM on HBO, it’s safe to say that some of the nation’s most respected television critics don’t seem to share our enthusiasm.

What the Huffington Post’s Maureen Ryan will tell you is that, “Aaron Sorkin’s New HBO Show Gets Almost Everything Wrong,” The New York’s Emily Nussbaum calls it “Broken News,” while Hitflix Hitfix’s Alan Sepinwall says that “The Newsroom’ too sanctimonious for its own good.” Unfortunately, what they’re not telling you is that if you’re the type viewer that can’t get enough of Aaron Sorkin’s trademark walk-and-talks, adore his attempts to “edutain” and would give an arm and a leg to still see SPORTS NIGHT back on the air (Quo Vadimus FTW!), THE NEWSROOM is the TV Addict equivalent of a wet dream.

But before we get to why, let’s first start with our one negative.

There is very little new about THE NEWSROOM. Much like STUDIO 60 ON THE SUNSET STRIP, the entry point into Sorkin’s newest world occurs after News Night boss (Sam Waterson) orchestrates some serious changes to how the story develops following his lead anchor Will McAvoy’s (Perfectly played by Jeff Daniels) very public and embarrassing meltdown bemoaning the state of journalism and the country as a whole. Enter a slew of fresh faces such as the globe-trotting Producer and former girlfriend of McAvoy Mackenzie McHale (Emily Mortimer), Senior (John Gallagher Jr.) and Junior (Alison Pill) Producers that fans will very quickly begin to think of as the new Pam and Jim (circa. THE OFFICE 2005), not to mention a flurry of other newsroom neophytes including a young idealist blogger (Dev Patel), a bombshell financial analysis (Olivia Munn) and the obligatory smarmy ratings obsessed network executive (Chris Messina). Characters and archetypes all very familiar to any Sorkin aficionado, which is where our admittedly awkward wet dream analogy comes in.

In the real-life world of cable news obsessed with ratings stunts, shouting matches and taking sides, THE NEWSROOM is how we wish the world of news actually operated. Mackenzie McHale demanding that Will McAvoy make a decision (“Are you in or are you out?”) when his need to be loved by his audience stands in the way of him doing his job is the kind of dialogue we get off on. We love that much to the chagrin of exiting EP Don (Thomas Sadoski), newly hired EP Jim Harper (John Gallagher Jr.) has no problem putting his neck on the line for a story he believes in. And the dressing down of a columnist for covering the good-for-nothing gossip beat? Well that’s just good-old-fashioned wish-fulfillment!

Much in the same manner in which THE WEST WING was how we hoped our government officials genuinely acted, Sorkin excels at creating environments and characters that place immense value in intelligence, encourage passionate discourse, and applaud people fighting for what they be leave in. And while many, including some of the nation’s most respected television critics are quick to characterize THE NEWSROOM as pompous, condescending and self-entitled, we’re only too happy to call it our 50 Shades of Sorkin.

THE NEWSROOM airs Sundays at 10PM on HBO (HBO Canada)