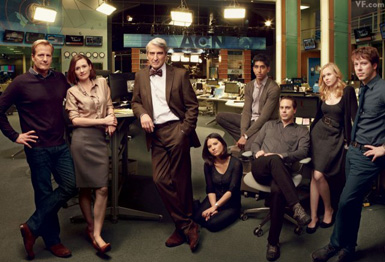 Whichever side you fall on, only one thing is certain: the most buzzed about show this summer was HBO’s divisive new series THE NEWSROOM.  Maligned by critics, it was consistently berated for failing to live up to the lofty expectations of political correctness and for offering characters that were deemed too flawed for television.  But, if anything, all the bad press only helped keep the show on the public radar and encouraged lackadaisical viewers to check the show out and keep tuning in. For every critic outraged over what they perceived as characters not worthy of the show, there was a newfound fan wondering why everyone was so hot and bothered by the show’s character portrayals.  Say what you will, but Aaron Sorkin knows how to create shows that get people talking.  That’s his genius.  He knows all the hot buttons to push.

Having created the Emmy-award winning WEST WING, a critical darling that ruled the broadcast airwaves for seven consecutive seasons, Aaron Sorkin had to live up to his own legacy.  His attempt to parlay his WEST WING success into showcasing the behind-the-scenes workings of a television studio in the series STUDIO 60 ON THE SUNSET STRIP was a critical-favorite, but barely caught the mass viewing public’s attention.

This time round, Aaron had a much more clever plan to capture everyone’s attention.  He wrote a series that would gall critics and spurn viewer interest.  In fact, the pilot to THE NEWSROOM was layered with secret ingredients all intended to do one thing:  get eyeballs – and it worked.  There was nothing safe or ordinary about the characters that populated the show so innocuously entitled.  The show was a puzzle-box of emotionally charged political, religious, socio-economic, and gender issues.  It dared to replay the most devastating and celebrated events of recent history, but through a lens crafted to remind us of how badly we, as a nation and our news media, had behaved and reminded us that we had devoured catastrophic and heightened-drama like it was candy.

THE NEWSROOM had the audacity to take us back to the BP oil spill and show us the horror of such a monstrous disaster all over again.  It gave us a glimpse of how a newsroom should have behaved and conducted itself when a state governor was shot, the night that the President announced Bin Laden had been killed, and how a Presidential debate should be conducted.  It also dared to remind us of the ethical and moral dilemmas that should be struggled with to ensure that news is really about newsworthy moments, not tabloid journalism.

THE NEWSROOM was not intended to lecture us or simply to hold up a mirror so that we could see ourselves reflected back; it is still a television show and its primary purpose is to entertain.  It did that superbly.  Whether one loved or hated the Will-Mackenzie cheating drama that laced each and every episode as these former lovers were forced to work together and share moments of agonizing humiliation time and time again; or it was the frustration with the dangling carrot of the love-triangle involving Maggie-Jim-Don, where we watched with fascination whether Maggie and Jim would ever get a shot at love, we could not turn our eyes away.  For all their incessant preoccupation with their own lives, it was the perfect foil to temper the bigger stories swirling around them as world events erupted day after day.  A show about competent people going about their day lives, striving to be the perfect example of who we should emulate, that would bore the average viewer to tears.

Instead THE NEWSROOM offered characters so outrageous, that we wondered that they were able to do their jobs at all.  But that was the brilliance of it, they were exceptionally skilled and competent at their jobs – they were just so flawed that they could not seem to keep their personal lives together.   Thus, making it highly addictive.  We were dying to see exactly how long Will and Mackenzie could keep up their tortured dance, if Maggie would ever have the guts to pick Jim over Don, and if Sloan could manage to not step into the middle of yet another awkward and potentially career-killing scandal.  We also fell in love with Neal and Charlie, who managed to seem like the sanest people in this crazy world – that is until Neal pitched a story about Big Foot or Charlie has one drink too many.

For better or worse, THE NEWSROOM brought something back to television that has been sorely missing – the “watercooler” factor.  Everyone was talking about it.  This was not just a show filled with hunky young actors that the young teens were swooning over, or a comedy that poked fun of being as politically incorrect as possible.  THE NEWSROOM had crafted a show worthy of talking about.  People didn’t just love it – they obsessed over it.  It was all they were talking about from the locker room to the conference room to parties in prestigious social circles.  It crossed age barriers and demographs.  It encouraged people to buy HBO and see what everyone was talking about.  Everyone likes to say that there will never be another show as great as LOST – but when you look back at it the one thing LOST really got right was that it got everyone talking about it.  It was the “it” show and if you didn’t watch it, you were missing out.  THE NEWSROOM brought that need to be part of the cool-crowd back.  People were watching THE NEWSROOM not because they had drank the cool-aid, but because they wanted to be a part of the conversation.

That’s the genius of Aaron Sorkin.  He got everyone talking about his show.  There were lots of great shows on television this summer, but the one everyone will remember is THE NEWSROOM – and that’s because it found a way to get our attention.

Long live Mackenzie and her hyper-insanity, Will and his tragically broken heart, Maggie and her clumsiness in love and getting across the room, Jim and his gentlemanly desire to do the right thing, Don and his ability to win us and Maggie back when he doesn’t deserve it, Neal and his eager enthusiasm to champion the little guy and get the story, Sloan and her passionate belief that the fate of the world rides the debt ceiling, and Charlie and his never-failing strategy to make sure that someone is actually reporting the real news.

With the first season of THE NEWSROOM airing Sunday night, we will be counting the days until its return for its second season next summer.  In the meantime, thank you to Aaron Sorkin, his entire writing team, the cast and crew, and everyone else who brought THE NEWSROOM to our television screens this summer.  You gave us a show to talk about and root for.  It’s been a blast!

In case it was not already programmed into your DVR or marked on your calendar in red, as a reminder, you do not want to miss the first season finale of THE NEWSROOM, airing Sunday, August 26th at 10PM on HBO (and HBO Canada). Everyone’s going to be talking about it.