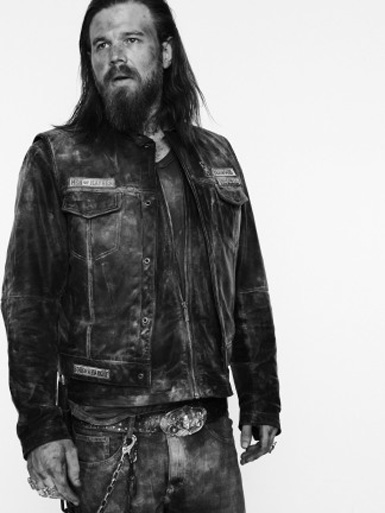 Fans everywhere gasped with shock and horror as fan-favorite and beloved Opie Winston (Ryan Hurst) leapt at the chance to martyr himself and save his best friend Jax Teller (Charlie Hunnam) in last week’s SONS OF ANARCHY episode “Laying Pipe.”  The fight that subsequently claimed Opie’s life was brutal and vicious.  True to the name of the episode, Opie was given a piece of pipe to defend himself as three other inmates surrounded him and beat him to death.

It was the blood price that had to be paid.  Damon Pope (Harold Perrineau) may be the devil incarnate, but he is not looking to take a person’s soul, he just wants blood for blood.  With four possible SAMCRO members to choose from, Damon gave them a diabolical choice: one of them had to die, and it was up to Jax to choose which one.  Yet knowing Jax would never hand over the lives of one of his brothers, Opie took the decision away from him. It was both beautiful and heart-breaking.

It has been whispered for weeks that the clock had run out for one of the SAMCRO crew.  But bets were hedged in favor of Clay Morrow (Ron Perlman) who was the most deserving of a bullet in the back of his brain for all the figurative bodies stashed in his closet, most recently the murder of Opie’s father Piney Winston (William Lucking).  Running a close second was Tig Trager (Kim Coates) whose days looked numbered for all his evil doings, which included the assassination of Opie’s wife Donna (Sprague Grayden).  But as true to life, the guilty often go free, while the innocent bear the burden and scars of everyone else’s sins.

Due to Clay’s recent heart-attack, as well as being dethroned as king of the SAMCRO club, Clay is remarkably out of the firing line – for now.  His sins weigh heavily on him and surely no one is going to forget his crimes any time soon.

As for Tig, he was the most logical choice to bear the brunt of Damon Pope’s wrath.  But having already killed one of Tig’s daughters, burning her alive while he was forced to watch, Damon was not yet ready to release Tig from his eternal damnation on Earth.  He wanted Tig alive and rotting away, remembering all his sins and paying for them through the pain of his loved ones that he could not protect.

Yet in the end, it was not Clay or Tig who paid the devil’s due – it was Opie.  Unable to bear the soul-crushing pain of his life anymore, Opie had already begun saying his goodbye’s to everyone long before being locked-up.  Perhaps it began years ago, when he gladly endured a five-year prison stay rather than ratting out his SAMCRO brothers.  Perhaps it was when he returned home and realized he could not support his family through an honest trade.  Perhaps it was the second he held his dead wife in his arms, after she had been struck down in his place.  Or perhaps it was the day he looked into his best friend’s eyes and saw that there was no humanity left.  Whatever it was that claimed Opie’s strength and will to live, he was a broken and lost man.   It was with one final act of courage and sacrifice that Opie embraced life one last time.  He claimed Jax’s place and fought to his dying breath with honor and love.

Of all the people left in his life, Opie was willing to die for Jax.  Childhood friends, best friends for life, it was the one thing Opie could give Jax that may save him.  Opie was not just looking to save Jax from a deadly beating; he was looking to save Jax’s soul.  He had watched with horror and sadness over the years as Jax’s soul was chipped away time and time again.  This was Opie’s last chance to claim a piece of that vanishing soul and keep it intact long after he was gone.  Opie’s final act of love was to save Jax’s soul.

Like Opie’s death will haunt us, it will haunt Jax.  Each decision he makes, each time he moves to take a life, and each time he looks at his sons, Jax will see the sacrifice Opie made.  Love is much more pervasive and long-lasting than hatred ever can be.  Opie did not strike out at Jax because Jax protected Clay, the man responsible for the death of Opie’s wife and father; Opie just continued to love Jax in spite of it all.  There was no anger or vengeance in his heart as he looked through the glass window at Jax; there was only love and a silent prayer that his sacrifice would not be in vain.  Jax needed a wake-up call before he sank too far into the darkness of Clay’s legacy, from which there was no escape.

One final note, this was my initial reaction at the end of watching last week’s episode:  “So many tears after watching tonight’s #SonsOfAnarchy, and now there’s a huge hole in our hearts because of it. Brutal.”  I stand by every word.  There is an Opie-size hole in our hearts now.

Related:
• “SONS OF ANARCHY Season Five Preview: Paying the Devil His Due [feat. Video Interviews with the Cast and Creative Team]”