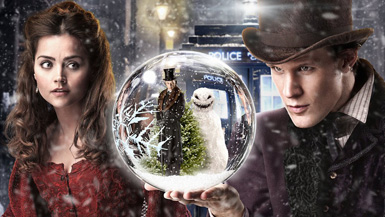 In honor of the Christmas season, the British time-traveling adventure series returns with a holiday treat. It’s a Christmas special filled with everything nice — snowmen, a mystery lady, and perhaps just a little bit of spice all wrapped up in a bright blue box. As we know, life with The Doctor is never dull and taking no exception this year, this year’s holiday adventure starts right off with another fun twist.

Still mourning the loss of his beloved companions, Amy and Rory, who had been transported somewhere in time by the nefarious Weeping Angels, The Doctor is not quite ready for another adventure. But time stands still for no man, including The Doctor. So when there is a damsel in distress, a big bad villain to conquer and another Christmas adventure to be had – all will prove too tempting even for the curmudgeonly Doctor.

This year’s Christmas adventure entitled “The Snowmen” promises to be a gift that will delight even the most determined holiday Scrooge. The Doctor may want to take a break from saving the universe, but when fate calls, even The Doctor must answer – or in this case, the call comes from the lovely Clara. Portrayed by Jenna Louise-Coleman (who dazzled and delighted fans with her portrayal of the doomed Oswin in “Asylum of the Daleks), Clara is a young governess who knows that, when trouble looms and the fate of everyone is at risk, there is only one person to call upon: The Doctor.

As executive producer Steven Moffat foreshadowed, “The Christmas episode is DOCTOR WHO epitomized and this year we’re going for even more epic. The Doctor, when we meet him, isn’t in a good place. A bit like when we first encountered William Hartnell as the Doctor in 1963 – or indeed Christopher Eccleston in 2005 – this a cold and withdrawn Time Lord, wanting no part of the world around him. It’s going to take a lot of Christmas spirit to get him back out those TARDIS doors.” In fact, star Matt Smith who plays The Doctor, revealed, “This Christmas The Doctor will embark on a dangerous adventure – a quest that leads him to Darkover House where something sinister is lurking.”

Yet, perhaps as confounded and confused as the fans, The Doctor will be unable to resist the temptation of discovering the mystery behind who Clara is, how she is related to Oswin (with whom she looks identical to), and how in the world something as benign and wonderful as a snowman could become the embodiment of another dastardly villain – deliciously portrayed special guest-star Richard E. Grant, who plays Doctor Simeon, who Matt Smith described as “a delight and brilliant at being villainous.”

As for the newest companion, Jenna Louise-Coleman teases that Clara is very mysterious and yet “down to earth” as well as “feisty and curious.” Then Matt happily added that Clara “isn’t intimated by The Doctor” and instead “finds him amazing and ridiculous.” Together it will be a fun frothy concoction as Clara and The Doctor tangle in a battle of wills and yet find a way to work together to conquer that may melt at the first glimpse of daylight, but which terrorizes the night with icy distain and a cruel, cold heart.

To see how The Doctor and Clara prevail against such an elusive and unfeeling enemy, be sure to tune in on Tuesday, Christmas Day (December 25th) at 9PM on BBC America (Space in Canada) for the premiere of the holiday DOCTOR WHO special “The Snowmen.” Bring a warm coat, some hot cocoa and a few cookies, for the grand opening of this Christmas gift. And remember it’s getting cold outside and there may be a few snowmen lurking nearby!

To prepare for this Christmas special, be sure to watch the DOCTOR WHO prequel webisode, “Doctor Who: The Great Detective” at below:

And to see a fun glimpse of what lies ahead in “The Snowman,” watch the trailer here: