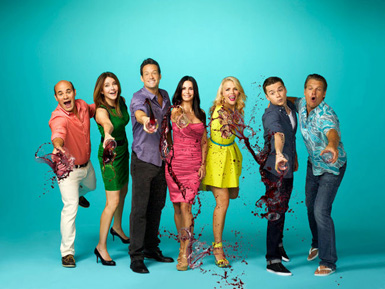 Making its debut on its new network, COUGAR TOWN returns with everything fans have loved over the past three seasons.  It offers an excess of wine, neighborly pranks and shenanigans, new obscure Jules’ rules, Travis and Laurie’s continuing dance of romance, and their fervent hope that Stan is not the devil-child they all fear is growing up next door.

COUGAR TOWN has long since embraced its inaccurate moniker and continues to mock it with every breath and title card each week.  Having quickly abandoned the the world of women chasing much younger men and instead focusing on the humorous antics of an ensemble of friends living in a cul-de-sac in the suburbs of Gulf Haven, Florida, COUGAR TOWN offers instead a much warmer, hilarious, and charming environment regaling fans with delightful tales of their everyday lives.  There is a strong thread of love woven through each episode and we follow along as it entices along on another crazy adventure.

At the top of its game, season four of COUGAR TOWN seamlessly unveils what’s next for Jules, Grayson, Travis, Bobby, Ellie, Andy and Laurie.  Perhaps imbued by the real life friendship of the stars themselves, these characters feel genuinely affectionate of each other.  That blending of the real emotions into the lives of the characters makes this series infectious and addictive — and we are drawn into their magnificent world.

In the first returning episode entitled “Blue Sunday,” one week has passed since the fairytale beach wedding of Jules (Courteney Cox) and Grayson (Josh Hopkins). Life is all blissfully rainbows and unicorns, until Jules has a dream in which Grayson flirted with another woman.  Refusing to believe that he is guilty of some crime or misconduct for something Jules has dreamed about, the world of wedded bliss turns a bit blue for Jules prompting Ellie (Christa Miller) to hold Grayson accountable for making his bride “blue.”  As gloomy as this may sound on the surface, in the realm of COUGAR TOWN, it is anything but dour as the quintet of friends find ways to outwit, outsmart, and out do each other in drawing Jules out from her blues.

Then with his parental units occupied, Travis (Dan Bryd) also seeks to hide from his confession of love to Laurie (Busy Philipps) last season.  But love professed is not something to take back and Laurie tries to make Travis feel better so they can be friends again.

Life guarantees few things, but in COUGAR TOWN, there are few: there will be wine (lots and lots of wine), there will be love amongst friends and family that can never be broken, and there will be insanely crazy rules and adventures to be had — for surely Penny Can did not invent itself and it is always a ready source of amusement when life becomes so blue or unbearable.  Plus, the eternal optimism of Jules Cobb, now perhaps Jules Ellis if she agrees to take Grayson’s last name, rallies the spirits of the Cul-De-Sac Crew (as affectionately known by the fans), never letting them sink into loneliness and despair.

Whether it is conquering the blues, testing social conventions about facial hair, protecting a neighbor from a potentially gold-digging girlfriend, sharing innocent kisses amongst friends, enjoy8ing fake dates, reliving the memories of meeting one’s closest friends, or revealing their darkest secrets and fears, COUGAR TOWN embraces it all and invites us to revel in each beautiful, magnanimous moment of it with them.

For new viewers and faithful fans, COUGAR invites everyone to have a glass of wine and celebrate life with them as they return for their 4th season on Tuesday, January 8th at 10:00 p.m. on TBS.  COUGAR TOWN has brought it A-game and like a fine glass of wine, deserves to be sampled and savored.  Grab a glass and join the fun!

Peering behind the curtain a bit, be sure to see our earlier article: “10 Tid-Bits We Learned from Cocktails With the Cast of COUGAR TOWN”