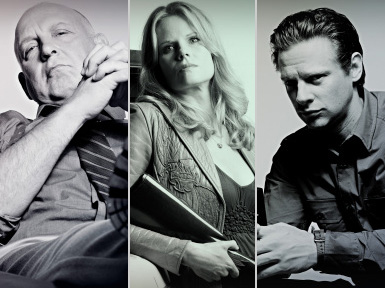 We may not know when the “snake in the grass” will strike, but evil has come once again to Harlan County in the FX drama series JUSTIFIED.  As if Raylan Givens (Timothy Olyphant) did not have enough to worry about with a baby on the way and the baby-momma Winona (Natalie Zea) refusing to have anything to do with him, more trouble has found its way to Raylan’s doorstep.  But this time, he is not alone – the ill winds of change have caught Boyd Browder (Walton Goggins) and Ava (Joelle Carter) up in its midst as well.

Just who is the Preacher Billy St. Cryr (Joe Mazzello) and what does he want with the folk of Harlan?  At this point Billy looks to be just as he appears, he is a preacher through and through and just wants to save the lost souls of those thought to be beyond hope and redemption.  But the same cannot be said of Billy’s scheming sister Cassie (Lindsay Pulsipher), who has other things in mind – namely to fleece each and every one of Billy’s wayward flock before moving on to the next unsuspecting town.

So if that’s the preacher and the con man, who is the killer?  Ah, that is the big mystery of the season.  Just how did the body of Waldo come to fall in the midst of the cul-de-sac suburb decades ago?  And who is Waldo?  In this week’s episode “Where’s Waldo?” plenty of answers will be provided about that big mystery that will lead Raylan on a merry-chase.

After last week’s shocker where Arlo slit the throat of an inmate who dared to ask about Waldo, we know for sure that Arlo is up to his eyeballs in this season’s mystery.  But with Arlo’s diminishing mental health? Will he be taking that secret to his grave?

To see “Where’s Waldo?” and discover more about the evil rising up to strike out at both Raylan and Boyd, and perhaps those they hold dear, be sure to tune in for an all new episode of JUSTIFIED on Tuesday, January 15th at 10PM on FX.