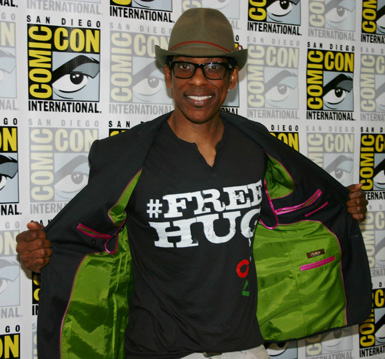 Headless horseman. That about sums up the surreal nature of Fox’s new drama series SLEEPY HOLLOW. In today’s modern world, the last thing we ever expect to see is a living being roaming the streets entirely without a head. But one day, the impossible happens and things that go bump in the night start appearing in the cozy little town of Sleepy Hollow. Who knew their little town would be a hot bed of supernatural sightings mingling with the occult and biblical prophecy? And trying to keep things calm, peaceful and explainable is newcomer Captain Frank Irving (Orlando Jones).

After Sheriff Corbin’s (Clancy Brown) unexpected death, Irving is summoned to keep order in Sleepy Hollow. Whether or not there are things no one can explain, it’s Irving’s job to keep the peace and protect everyone. He must be the rock in the midst of uncertainty and when confronted with creatures that may not be entirely human. He does not have to fully believe that Ichabod Crane (Tom Mison) sees and fights the supernatural as they arise, but Irving has faith that Ichabod paired with Lt. Abby Mills (Nicole Beharie) is an effective use of department resources in resolving unexplainable problems.

In a recent exclusive interview, star Orlando Jones candidly shared how he sees his character Frank Irving in this increasingly unpredictable world of SLEEPY HOLLOW. He also offered a few fun teasers for fans, such as this next episode will give us the backstory on who Headless really is — after all, not everyone starts off as one of the Four Horseman of the Apocalypse.

Orlando talks about whether it is important for Frank Irving to be a “believer” in SLEEPY HOLLOW, or if Irving can be just as effective at his job by keeping a healthy open-mind about what is going on. While Irving has to be a pragmatist, Orlando is more unfettered and clearly is an enthusiastic champion of the show. He loves how show’s no-holds-barred willingness to be outrageous, to embrace the funny in the crazy drama, and how it refuses to be boxed in by genre stereotypes. SLEEPY HOLLOW loves to show off its funny side amidst the horror and, as a result, it offers a concoction of pure televised fun. Television is meant to be entertaining and fun, and SLEEPY HOLLOW has figured out how to offer it in spades. It decided that a headless horseman was not enough; it wanted to feature witches, golems, reanimated dead, spells, prophecies and creatures that will make your skin crawl. It wants to make your heart race and your brain burst thinking about what it may throw at our heroes next.

SLEEPY HOLLOW is a fantastical horror story with heroes trying to adapt to a world that should not exist. But what do you do when your nightmares come to life? You find a way to work with it. That’s Frank Irving’s world. He may not yet be a “believer,” but he is too savvy to ignore the evidence that there is something more going on in this not-so-sleepy town of Sleepy Hollow.

To see what next appears out of the mist and strikes terror into the hearts of men, be sure to tune in for all new episodes of SLEEPY HOLLOW on Monday nights at 9PM on Fox (Global in Canada)