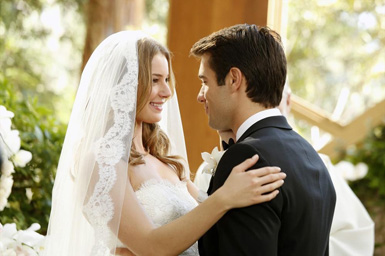 In the ABC drama series REVENGE, even the best laid plans of Emily Thorne (Emily VanCamp) are sure to go haywire once in a while and, unfortunately, for all her careful planning, something went very wrong on her honeymoon. Lydia (Amber Valletta)cornered Victoria (Madeleine Stowe) on the yacht, making Aiden (Barry Sloane) unable to secure Victoria while Emily was on deck setting the stage, and then Victoria took it upon herself to accost Emily on deck and heated incriminating words were exchanged — all to the horror of Daniel (Josh Bowman) who stood in the shadows hearing everything. He learned that the woman he had just married had been using him all along, and in his drunken, angry stupor, he shot Emily with the gun she had brought to stage her fake death incriminating Victoria.

That’s right folks, Daniel was the shooter. Having just found out about Sara’s (Annabelle Stephenson) suicide attempt, and that Emily had been using him to get back at his mother, he just shot her. The look on Emily’s face was equal parts guilt and horror. It was her own fault that this had come about. The stage had been set perfectly, but it fell apart because Daniel heard what he was never supposed to hear. That gun that was supposed to be just a prop was just too easy to use for real — and Emily was shot point blank in the chest and thrown back into the water.

With Aiden and Jack (Nick Wechsler) worriedly searching for her on the beach when she failed to make her prearranged rendezvous, the fate of Emily Thorne is not yet known. Does she survive the gunshot wounds? Does she eventually make it back to the buoy and the beach? Will Daniel remember his deadly actions after he finally sobers up? And what about Victoria? Does she have a clue what really happened on the deck after she left?

For those who saw the previews of REVENGE when it returns on January 5th, a few of those questions are answered. Emily does survive. But does she remember who she is? Is the amnesia real or faked?

In a recent press interview, executive producer Sunil Nayar gave the inside scoop on what’s next in the increasingly complicated world of REVENGE.

Emily’s Amnesia: Partial, Complete or Faked – “You’ll have to see.”

Daniel’s Mindset – “He’s tormented by the nature of what he’s done. You even get a sense right after he shot her that there’s flicker of regret that he did a rash act. But he’s been completely betrayed. It’s not like you don’t understand the impulse, but carrying through with the act, that’s a big moment for Daniel. He will have to kind of wrestle with what that means and wrestle with the fact that now he’s learned the truth about the woman that he’s given his heart over to back and forth over the last couple of years. So you’re going to see a real transformation in him. There’s a regret that will come from it initially, but then it will grow into a kind of strength — a hardening in Daniel Grayson because the person he trusted the most has really up ended the nature of that trust. It’s going to be a great journey that we’re going to put him on.”

Suspects – “There’s a couple people who become primary suspects. Emily obviously is not a benefit to them in the investigation, but there will be evidence on the boat that [the police] are pursuing and they will have photo evidence from what Margaux (Karine Vanesse) is doing, so the Voulez part becomes primary in the investigation. And in classic REVENGE style, you’ll see how one person becomes the suspect and then it sort of shifts over to someone else.”

On Lydia’s Resurrection – “We wanted to bring Lydia back right at the beginning of this season because she is great. We thought since Victoria got off the plane, it doesn’t require a whole lot of explanation and people don’t require a lot of backstory on how is Lydia still alive. And we love Amber and what she brings to the show. So we thought the best time to do it was as we got up to the shooting and in the aftermath that she would bring such a great element of chaos with her and she would become such a great suspect for what’s going to happen. She also brings Conrad into the story in a way which we haven’t seen before either. So she seemed like a no-brainer and we were very fortunate that she was available to come back.”

Nolan & Patrick – “We always knew that we were going to bring back Victoria’s son just for Nolan (Gabriel Mann). I think the two of them are so great together. What we’re doing to do is put them through their paces. Happy relationships are all fine and dandy, but that is not where this show thrives. So Patrick (Justin Hartley) kind of seeing that there’s this space between this painting that Nolan obviously bought from his mother will have him call into question with whom his fidelities lie. I think that the answers are going to cause a lot of great conflict in the Victoria/Nolan/Patrick triangle.”

Sara’s Future – “You’re going to see her. She could be in the same hospital as Emily. But Sara’s not gone yet. . . We’ll find out in the episode back what actually happened to Sara.”

Charlotte’s Journey – “She will slowly start to see Emily in a different way, which is going to cause that rift with the sister that [Emily’s] always tried to get closer to. We want to give Charlotte a love interest in the second half of the season ’cause now that she’s more of a woman, it’s time time to acknowledge her as such — and we have a way to do that will create more conflict in the world of Emily and Nolan also. But we want to keep her going ’cause she has been fantastic this year.”

Jack & Emily’s Relationship – “In the first half of the season, we’ve had Jack really scrutinize who Emily is and what she’s doing. But he will come to see in the aftermath of the shooting that it’s really his ultimatum that put Emily in this position and there’s a bit of culpability that he has. So you’re going to start seeing the thaw between Emily and Jack. He has now taken things from her too and it is more of an equivalent relationship as a result.”

Aiden’s Place – “There’s definitely still the triangle between Emily-Aiden-Jack and Aiden’s still in the picture. His plans have obviously gone awry. His future has just been up-ended and he’s going to have to stay in the Hamptons for a little longer and that is confusing to him. So we’ll sort of see that there’s another great introduction of the Aiden backstory that continues into the future that shakes things up between him and Emily too.”

Is it true love for Emily and Aiden? – “Absolutely. She’s in love with him. . . . [But is he Emily’s true love?] Obviously, it’s not Daniel. But then with Aiden, it’s so conflicted because he reminds her so much who she was and they share that pain. Like in the proposal, that was about the nature of who they are to each other, which is they have been through hell and that’s what connects them. So there’s an element to that love that is based on damage. Whereas Jack, that’s love based that is based on an idealism of what the childhood was and in the present that is also really damaged. So that’s what makes love complicated on REVENGE. It’s a question we want to try to answer as each episode goes by.”

Aiden and Jack’s Newfound Alliance – “Their relationship is going to be maturing a little bit. They both understand that while previously they were fighting over this woman, and now that she’s vulnerable, that same passion for her is going to bring them more together. And they so great together, so we want to see more of that.”

What does Victoria know? – “The photograph is the catalyst that starts her on a journey to really have something on Emily. She was looking for just one piece of information. So she doesn’t have any idea that Emily is Amanda Clark at this point in time. But she definitely knows that this woman is not on the level and that some of her suspicions are completely correct, which gives Victoria a great engine going into the second half of the season where she now has the power in the relationship, which she hasn’t had.”

Is the marriage real since Emily used a fake name? – “[Emily’s] done her research so that anything she does is on the legal level. So technically she’s Emily Grayson — finally.”

Annulment prospects? – “It’s tricky. We looked into rules of annulments in New York state, and it requires interestingly a degree of fraud that has to be committed. Daniel actually has the grounds for annulment much stronger than Emily would at this point in time. But you’ll see coming into the next episode why that is actually not the best option for him.”

Emily’s Revenge Plan – “She definitely wants to take the Graysons down. That will never be a mission that leaves her. But with Victoria knowing who she is [or rather who she isn’t] and as we play things out coming back, [Emily] understands that the way she has to go about it is going to be completely different than the way that she has done it in the past.”

To see how much Emily actually remembers of her past and where the investigation goes into her shooting, be sure to tune in for all new episodes of REVENGE, which returns Sunday, January 5th at 9:00 p.m. on ABC (CityTV in Canada).