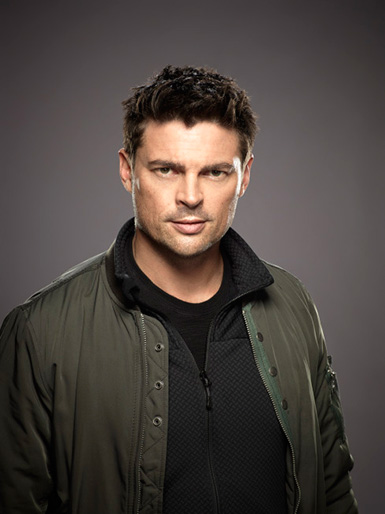 Imagining a future where humans could be paired with androids working together to achieve peace and safety, FOX’s new drama series ALMOST HUMAN also explores wonderful themes of what it means to be human.  In a press interview at the Warner Bros. Mondo International Press Tour, star Karl Urban candidly shared whether he thinks his character is learning to be more human from his synthetic partner, and how fun it is to work on a sci-fi series with such humor and soul.

What you do like about your character, John Kennex?
KARL: There’s many things, many aspects. I think, if anything, that is what I enjoy most about him, is that he can be so many different things. He can be someone who is morally centered.  He can be someone who takes the law into his own hands and isn’t afraid to dispense justice as he sees it.  He’s a renegade, yet he can also be a “by the book” guy.  He’s a contradiction in many ways.  He’s somebody who is doing his best to deal with a posttraumatic stress situation.  He’s not a character that necessarily wears that on his sleeve, but that it’s in there and that you can see that, by some of his behavior.  I think he’s a compassionate character.  I think he cares for people; I mean, particularly the victims of his crimes.  But then at the same time, in order for him to function and do his job, he can’t get too emotionally invested.  Otherwise, he wouldn’t be able to do that kind of job.  So I guess it’s a big barrel of contradictions with Kennex.  He’s just so many different things.  And that’s what makes him exciting to play.  He’s fun.  He’s gregarious.  He’s got a great sense of humor, but he’s got an edge to him as well.  And you wouldn’t want to cross him.

What is your favorite scene or episode so far from the show?
KARL: I think it was the third episode, the sexbot episode, called “Skin.”  I liked that episode.  I thought that it had a good mixture of comedy, of drama.  I enjoyed the sort of warmth between Kennex and Dorian.  I enjoyed the interaction with the child, whose mother Kennex is trying to find.  To me, I thought that was a pretty good?balanced show, and it had great depth.  That wonderful scene at the end where Michael is with the android who is being decommissioned; killed, effectively, put to sleep.  And it was wonderfully touching.  That’s what you want in a show.  We want to give the audience some fun.  We want to give them some laughs.  We want to give them something to think about.  And we want them to feel something.  And if we can do that, that’s the perfect ALMOST HUMAN episode.

What do you think is the common quality that was required not only for your character, but for the whole group that is participating in this show? Ands a group, what did they have to bring to the show?
KARL: I think that the quality of this cast is really a testament to J.J. Abrams.  That’s what he does so well, is put groups of people together.  And ALMOST HUMAN is such a wonderful cast.  And in the darkest hours when you’re in the trenches ?? like last night, for example, we were shooting until 2:00 in the morning, and it was minus 14, and we are outside ?? it would have been unbearable if it weren’t for the fact that I’m working with such great people.  And we laugh a lot, and we’re there to support each other.  We genuinely all, like each other.  It makes it easy.  It’s a very giving environment.  Nobody is there to, in a negative way, outdo anybody else.  We’re all there to contribute, to make this show as good as it can be.  And that is the single agenda.  I think that’s why we all get along so well.

Do you enjoy watching other TV shows that have maybe aired years ago, on DVD, Blu?ray, or digital, catching up and seeing maybe several episodes one after another?
KARL:  Yeah, I do.  I haven’t  obviously, of late. I’ve been far too busy to actually watch television.  But most certainly.  I think that’s, really clearly where television is going.  People are enjoying DVR’ing it, watching it when they want to watch it, going out and buying box sets.  And I certainly, have done that over the years, whether it be sort of SOPRANOS, DEADWOOD, BATTLESTAR GALACTICA. I think it’s great to be able to watch it when you want to watch it.  And if you want to do a block of three or four or whatever in a row and to have that ability and then view it on your terms, it’s wonderful.

How do you think being able to watch several episodes adds to the viewing experience?
KARL:  I think it enriches it, personally.  I think that, having that unbroken continuity of story and character. I think it’s just a wonderful sort of luxury really, if you have the time.  I certainly enjoy doing that.

You said in an interview that your favorite robots were from “Blade Runner.”  Do you feel a connection between your character and Harrison Ford in that movie?
KARL:  Not particularly. I mean, the whole tone of “Blade Runner” was perhaps a lot darker than ours.  I mean, it was noir.  That’s essentially what that is.  And there are elements of noir in ALMOST HUMAN, but there’s such a lot of comedy and humor and a little bit of slapstick, and we really are quite a different beast.  I think there is some visual similarities, but really I think that’s where it ends.  We’re not presenting a dystopian vision of the future where, the majority of mankind has gone to off?world colonies.  The world that ALMOST HUMAN is set in is not that much different than the world we live in today.  It’s just augmented by, another 30?odd years or 34 years of technology.  And we want it to be accessible.  The people that live 40 years in the future in our show still have the same issues that we have.  They still struggle to pay their mortgage.  They still struggle to do the right things by the right people.  And I think that’s kind of really where the similarities end.

You said that you hope this show will make people think about different things on different level.  Which subject does this show tackle on a personal level that you never thought about that deep before?
KARL:  Well, it’s interesting. We’re doing an interesting episode at the moment where we’re actually looking at technology and how it has the propensity to draw people who are far away from you close to you, but then also simultaneously it can create a barrier and push people who are with you further away.  And I think that’s it’s very interesting.  I certainly feel that every day in my life, whether I’m interacting with my kids and they’re on the video games or even just ?? a classic example, when I got together with all my friends from “Star Trek,” it was, like, one of the first days on set.  We came back to do the second “Star Trek.”  It was wonderful.  We all welcomed each other.  It was great to see everybody.  But literally within 20 minutes, we’re not talking to each other.  We’re sitting in a line in chairs, and everyone’s on their phone.  So we’re together, but we’re all in our own little worlds.  And that’s just indicative of, I think, where we’ve sort of evolved to as a society.  And Kennex really yearns and pines for that human connection.  That’s what he’s missing, and that’s what he’s looking for.  And to me, that’s a really interesting journey, and it’s a thought?provoking one at that.  He just wants to go out to dinner and have a conversation and connect with someone without them taking hologram calls from their mother or their therapist. So that’s just one example.

That’s kind of interesting because he’s really quickly thawed and adapted to his new partner, who he previously had such animosity towards.  If he’s that disinclined to want to connect to things that aren’t human, why is he suddenly taking on that more familial aspect with his partner? Why has he really warmed up to his partner so quickly?
KARL:  I think it’s a multitude of things.  I think, firstly, Kennex has warmed to Dorian because Dorian has helped save Kennex, not just physically saved his life, but also drawn him out a little bit of his shell.  When we first met Kennex in the pilot, he was in a pretty dark, bitter, posttraumatic stress kind of place.  And ironically, the one thing that helped bring him further out of that was this sort of artificial being, this symbol of something that he really kind of blamed for a lot of pain and suffering in his life: the technology, these synthetic robots.  And then it’s got to be also the actual character of Dorian.  I think he’s such a warm character that’s filled with such wonderful humanity that, even if Kennex wanted to dislike him, he couldn’t. It’s fun because sort of in that acceptance, I think, for me, the fun part is that that sort of ribbing and that banter that goes on, there’s no malice in that.  There’s no negativity behind it  or a mean-spiritedness.  It’s actually Kennex begrudgingly actually really likes Dorian and enjoys his company and, more than that, values him as a wonderful asset, as a supercomputer.  He values the fact that Dorian can help him do his job better and, in some ways, can do his job better than him.  And Kennex is, I think, open enough to acknowledge that.  And to me, that’s a sign of a great man.

It’s just interesting that that’s his closest human connection, is with an android.
KARL:  Isn’t that interesting?

That’s pretty ironic.
KARL:  It is ironic.  Well, in some ways I would put forth that Dorian is in some ways more human than Kennex.  Kennex has many aspects of him that are shut down.

So he’s being taught to be a better human.
KARL:  Right. He’s learning how to be a human from a robot.  And I like that. I like that a lot.