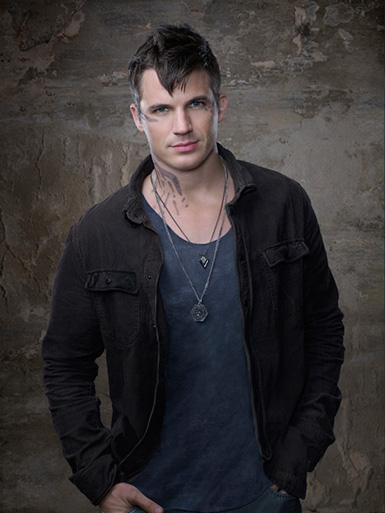 In the new CW series, STAR-CROSSED, it is an epic tale of young love against the odds when an alien boy and a human girl meet under the most unusual of circumstances. From the first time you meet Roman (Matt Lanter), you will see why he gave his heart to a human girl. Even at the tender age of six, his instincts were to trust and protect the young human girl who befriended him. Ten years later when they are reunited under the government order for Atrians and human students to integrate, Roman instinctively knows Emery (Aimee Teegarden) is there and cannot help but gravitate towards her. So there is the undeniable pull of destiny at play and Roman is strong believer in destined love — because for Atrians, they only have one true love.

In an exclusive interview from the set, star Matt Lanter talked about Roman’s unshakeable love for Emery, as well as Roman’s conflicting sense of duty to his people as a future leader amongst the Atrians, and rising problem of the extremists on both sides:

The following is another fun interview was with Matt at San Diego Comic-Con as he talked about STAR-CROSSED:

As Matt mentioned, viewers will get to know Roman for his strengths and weaknesses; and his love for Emery is both a strength and a weakness as it can be used against him. So in the 13-episodes of STAR-CROSSED’s first season, much will be revealed about Roman as he valiantly tries to pursue a human/Atrian relationship with Emery and overcome the obstacles they will face.

For Roman, because he is a leader of his people, a lot will be asked of him to be given up and forsaken. He will be asked to sacrifice his desires and goals for the good of the Atrians. But that is a lot of weight to place upon a young teen boy. As a future leader of his people, Roman will strive to protect the Atrians and yet still follow his heart. For it is Roman’s father’s greatest wish that the Atrians and the humans find a way to live together and forge a future together, and with Emery by his side, Roman will try to honor his father’s wish.

Yet peace, happiness, and understanding shall remain elusive as tentative steps towards integration seem to invoke rising levels of tension and hostility. Roman will find himself constantly struggling to broker peace on both sides. There are the war-like Trags, extremists among the Atrians who refuse to believe that integration with the humans will ever be in their best interests. Then there are the Red Hawks, a faction of humans who believe that the Atrians have come as a first-wave of a long-term plan of invasion. With fears rising on both sides, it only takes one spark to inflame an outright war.

Surprisingly, despite the brewing friction between the humans and Atrians, Roman remains tenacious in his belief that he and Emery are destined to be together, as they share a connection that he has never felt with anyone — that connection even makes him feel more connected to the humans than the Atrians at times. So it will be a struggle for Roman’s heart, with his love for Emery proving to be as equally strong as his love and duty to his people. Roman cannot help but fight for her and protect her, sacrificing his own feelings at the cost of his own. He cares about her that much.

In the Comic-Con interview, Matt provided a very beautiful explanation as to whether Roman and Emery are destined for each other or are they simply falling in love. He said: “Roman is falling in love with his destiny.” And in STAR-CROSSED, we are invited to fall in love along with them.

To experience every delightful moment of their love story, be sure to tune in for the premiere of STAR-CROSSED on Monday, February 17th at 8:00 p.m. on the CW. You can read more about STAR-CROSSED here:

STAR-CROSSED Scoop: Introducing An Alien Tale of Forbidden Romance, Forced Integration, and How Its Story Differs from ROSWELL.