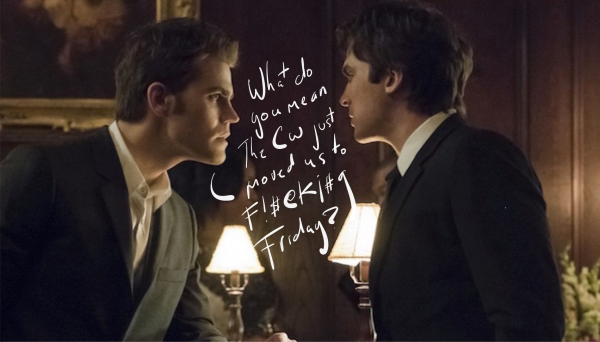 The CW recently announced its midseason schedule, and one of the most notable changes coming in 2016 is moving Thursday night mainstay THE VAMPIRE DIARIES along with spinoff THE ORIGINALS to Friday nights beginning in January. Being moved to a Friday night is often viewed as the death knell for a series — one step away from cancellation — but does this mean that the TV tide is turning and viewers are less passionate about series with a supernatural slant? Let’s examine the state of the supernatural union and determine whether or not we’re looking at the last days of vampires, fae, werewolves, demons and other fantastical creatures on TV.

Do Friday Night Slots Mean Certain Death for a TV Show?
Now, there’s no saying that a move to Fridays has to be the end of THE VAMPIRE DIARIES and/or THE ORIGINALS. The CW could establish a solid night on Fridays with these two shows for those dedicated fans that still watch it live. The main problem is competition from similar shows also on Friday nights. NBC’s GRIMM has been a Friday night niche success, but now FOX is moving SLEEPY HOLLOW to Fridays as well. My main concern is that there may be too much overlap between fandoms of these four series, which means casualties are a possibility. The last time a supernatural series that I loved moved to Friday didn’t go so well, i.e. when NBC paired CONSTANTINE with GRIMM during the 2014/2015 season.

Are Superheroes the New Vampires?
Superhero-centric shows are everywhere, and The CW is adding a third to its lineup in January with DC’S LEGENDS OF TOMORROW. In fact, it’s taking the Thursday night spot previously dominated by THE VAMPIRE DIARIES. Although it feels like superhero series are everywhere right now, SUPERNATURAL continues to be a force to be reckoned with on The CW. More episodes of IZOMBIE have been ordered for Season 2. Also, to go back to CONSTANTINE for a moment, the ARROW Season 4 episode that featured the beloved master of the dark arts resulted in a ratings surge. It may just be vampire fatigue at the moment, but there’s still a demand for fantasy and horror, with AMERICAN HORROR STORY landing a sixth season and ASH VS EVIL DEAD getting a second season are any indication. Superheroes haven’t completely taken over the TV landscape.

Is More Traditional Sci-fi Coming Back to the Forefront?
THE 100, also airing on The CW, has been one of the most compelling sci-fi series on TV, with comparisons to epic series like LOST and BATTLESTAR GALACTICA. This is the series taking over THE ORIGINALS’ Thursday night slot in January. For a while, even Syfy — the network that was once the leader in sci-fi programming — had more shows of the supernatural ilk than spaceships, time travel and robots. 12 MONKEYS marked a return to more sci-fi heavy programming, and it’s back with its sophomore season in 2016. KILLJOYS and DARK MATTER are also back in production for a second season. Upcoming new series include potential sci-fi powerhouses THE EXPANSE and CHILDHOOD’S END. Does this mean Syfy is abandoning fantasy/horror programming? Not a bit. THE MAGICIANS joins the Syfy lineup in January, and BITTEN returns for its third season. Plus, new series WYNONNA EARP is currently in production, and a female-led VAN HELSING has been acquired. While it may look like the end of an era, there’s still a heavy presence of the fantastical.

Is the End Nigh for THE VAMPIRE DIARIES and THE ORIGINALS?
It’s easy to conclude that moving THE VAMPIRE DIARIES and THE ORIGINALS to Fridays means they won’t be getting another season. With all of the options available to fans of fantasy/horror series, and fierce competition on Friday nights for this audience, it could be the greatest challenge these two series face. On the flipside, viewers have more tools at their disposal — DVRs, time shifting, and online viewing, to name a few — so live viewing is slowly becoming less of a factor. Networks are even starting to drop “live plus same day ratings,” focusing more on combined overall numbers. The instinct may be to cue up the funeral march, but Friday night doesn’t necessarily spell the end. Don’t put a stake in them yet.

If anything, viewers are becoming more sophisticated and selective with all of the options available, so if THE VAMPIRE DIARIES or THE ORIGINALS happens to die, it may not be due to a move to the Friday “death slot.” It’s becoming increasingly difficult to stand out in the current TV landscape, and could just be victims of too much on TV. Horror and fantasy are thriving alongside the superheroes and the sci-fi … there just may be fewer familiar fangs in the long run.

Melissa Girimonte is a writer, podcaster and social media marketer.
She channeled her life-long passion for television into The Televixen,
where she serves as Founder and Editor-in-Chief, and is co-host of
female-powered TV podcast Remotely Girly. When not watching or writing
about television, she enjoys travelling to pop culture events across
North America.