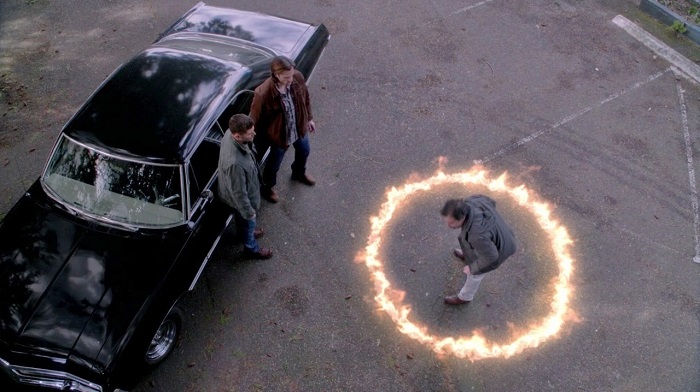 “Our job here at Visual Effects is to try and accomplish anything that is too dangerous, too expensive or just impossible,” explained VFX Supervisor Mark Meloche during our visit to the SUPERNATURAL set in Vancouver.

The VFX group on SUPERNATURAL work on a lot of aspects of individual episodes. Sometimes what they do is very small and entails them fixing minor aspects of a scene. For example, they shot a scene in front of a sign that had an axe flashing up and down, looking like it was moving. But the sign actually broke during filming, so they fixed the positioning in VFX because it would be too costly and time-consuming to re-shoot the scene just because of a broken sign. They also handle a lot of “digital makeup” shots, such as the angel healings, and bridge the gap between prosthetics and the final scene — for example, Kevin’s burnt out eyes was a combination of both prosthetics and VFX.

Related: Go behind the scenes of the MOL bunker & Props, Wardrobe and the Impala

If you’re interested in what goes on behind the scenes of VFX at SUPERNATURAL, here’s a few tidbits for you: 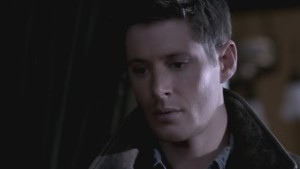 Back in early season 10, the VFX crew de-aged Dean to create a flashback scene. They began by searching out younger photos of Jensen Ackles. They also had to remove the beard/scruff that present-day Jensen was wearing while filming the flashback scene. Present-day Dean needed to have a scruff for continuity for scenes the next day, so they couldn’t shave it off for the flashback. “So we had to erase the bead. We’ve done a skin fix on him, we’ve taken out all of his character lines — actors don’t get wrinkles, they get character lines — and we increased the size of his eyes by 2%. That was the route that we went in order to accomplish what he looks like 10 or 12 years ago.”

A lot of fans have noticed that a staple of the show — the angel wings burnt on to the ground wherever their dead bodies fall — isn’t something you see on the show anymore. So we asked Meloche if that was because of timing. He said that’s actually a decision from the producers/showrunners. “We’ve had three showrunners on the show. Each one has a slightly different take on the show. Those shots, although we can accomplish them no problem, those are things that, over time, have come in and out of the show. So those aren’t the things that we’re avoiding, those are things that…because it’s been established that we know the angels are dead and whatnot [they are just not done any longer]. For the die-hards, I understand that it can be confusing.” He also explained that “we see how our visual effects fit into the situation we’re in right here. Jeremy [Carver] is looking at it how that situation situation fits into the entire arc of the show or the entire season.” 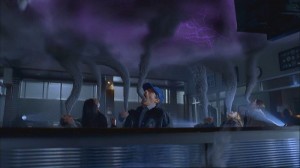 According to Meloche, the demon smoke on SUPERNATURAL has “gone through three iterations. The first you’ll all recall from season 1, [which] was very minimal and that was the best they could do [at the time and was done by an external company]. Then once we got our hands on it [in house in season 2] we created a new smoke that could turn and weave a little bit, but it wasn’t that controllable. As of about three years ago we designed this new smoke rig [and] we can make this thing dance. It can do tight turns.” The photo to the right is from the season 3 episode “Jus in Bello”, which would have been the second iteration.

Fire is used in a lot of different ways on SUPERNATURAL. In the season 10 episode “About a Boy”, the evil witch was burned in an oven of fire. Meloche explained that it was “a stunt woman that you’re seeing [inside the oven], wailing around. But as far as the flames go, all of the flames in [the stove] are computer generated [CG] and we’ve got the stunt person banging on the door.” The show has also occasionally lit people on fire. In the early days they did full body burns as a stunt. “The problem with the body burns is they’re very dangerous and they take a lot of time to accomplish. And the flames themselves tend to be very tall and wick-y because the amount of heat that’s generated tends to suck up all the flames in straight lines. [Doing CG flames]  tends to give us a better look and it’s way more controllable as well.” Finally, there’s the rings of holy fire that the Winchesters often use to trap angels. Meloche said that he gets the “why don’t you just put the actors in a ring of fire?” question all the time. “The problem is that when you’re surrounded by the ring of fire, it’s eating up the oxygen around you and pulling all the air up and in, so you can actually get an overdose of CO2, so we tend not to do that”.

How Much Lead Time does VFX Get?

They actually get a bit of a head start because they start filming months before the show actually begins airing. Meloche also explained that sometimes they do R&D and prep VFX shots on episodes that haven’t even filmed yet. Also, because “the show is not a huge show as far as the number of [VFX] shots we have to do, so the resources that we have and the time we have for a particular episode can be pushed towards something that’s much more creative and much more fun. So we’re actually adding in pieces [of VFX to some episodes] that weren’t even scripted.” 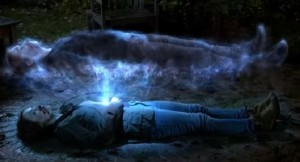 “Instead of creating a model of Charlie [in the season 10 episode ‘There’s No Place Like Home’], we used something called photogrammetry, where she was in costume laying down. I photographed her from multiple angles [and took] probably over 100 photos. That’s fed into a separate piece of software that actually creates the model of her” and allows them to air scenes like the one to the right. They’re going to be utilizing this technique in an upcoming episode as well and Meloche says those are small techniques that move things along quicker.

They used to use contact lenses on the actors in the earlier demon scenes. But as they were acting and emoting they would move their eyes and tend to look around and the corners of their own eyes would show, so now they use VFX.

The show used to be shot on film, but it’s now entirely digital. When the show utilizes flashbacks (especially in the “previously on” segments at the beginning), they “process to get the grain out so they don’t look like they were shot in 1952. I’m not saying they do, normally, but when you’re [putting] them back-to-back with a digital clean image, we tend to help clean that up a little bit.” 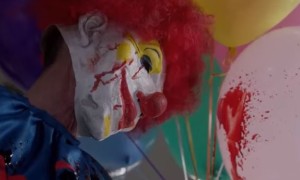 The VFX team also helps with continuity issues. For example, in the episode “Plush”, [a clown] was sprayed with blood and it shows up in a later scene, but for this particular shot it wasn’t emulated. When you’re spraying blood around you can’t make it go exactly where you need it to go. So [one of their VFX artists] is actually taking a shot that I took of the mask with the blood on it and putting it back on to an earlier shot for continuity reasons. The irony of this is that if we do our jobs right, no one will know we did our job.”

Finally, for all of you tech savvy people, in a special room in the VFX trailer there is what’s known as the “render farm”, as well as digital storage for all 11 seasons. According to Meloche, he thinks they’re up to 30 petabytes (see Wikipedia for an example, but it’s huge).

SUPERNATURAL airs Wednesdays at 9:00 p.m. ET/PT on The CW.