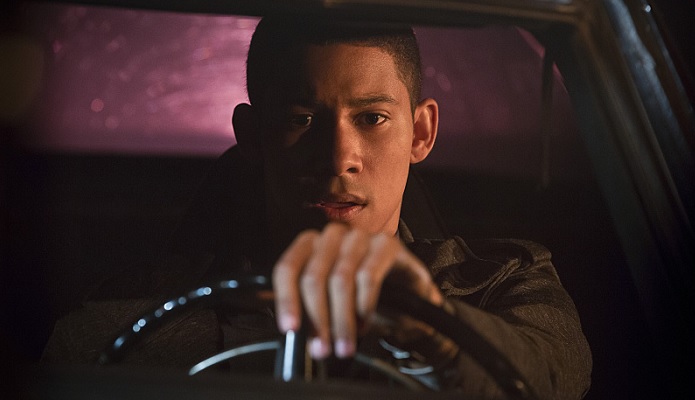 What’s in store for The CW’s shows the week of February 1? Sam and Dean are taking a little trip back to highschool on SUPERNATURAL when some familiar faces return, Wally’s drag racing secret is revealed on THE FLASH, Michael Trevino returns to THE VAMPIRE DIARIES and Jane starts her thesis on JANE THE VIRGIN.

JANE THE VIRGIN 2.10 “Chapter Thirty-Two”: In the middle of the night, Jane (Gina Rodriguez) gets a burst of creative energy and starts her thesis. Unfortunately, Mateo spills orange juice all over her computer causing it to crash and Jane loses all her hard work. When Jane brings her computer to be fixed, she meets Dax (guest star Diego Boneta) and with the urging of her friend Lina (guest star Diane Guerrero), Jane considers dating again. Rogelio (Jaime Camil) decides to have his mother Liliana (guest star Rita Moreno) become his manager, but soon realizes that was not the best decision. When Rafael (Justin Baldoni) comes to after being attacked by his mother now known to be the crime lord Mutter, he goes to Michael (Brett Dier) and tells him what Mutter is looking for.

THE FLASH 2.12 “Fast Lane”: Barry (Grant Gustin) teams up with Wells (Tom Cavanagh) to figure out a way to close the breaches, but they are distracted by a meta-human nicknamed Tar Pit (guest star Marco Grazzini) who can transform into liquid asphalt. Iris (Candice Patton) is concerned for Wally’s (Keiynan Lonsdale) safety after she finds out about his drag racing hobby. When he refuses to stop she makes a bold move that puts her in danger.

SUPERNATURAL 11.12 “Don’t You Forget About Me”: Sam (Jared Padalecki) and Dean (Jensen Ackles) drop in on Jody Mills (guest star Kim Rhodes), Claire (guest star Kathryn Newton) and Alex (guest star Katherine Ramdine) after receiving a panicked phone call from Claire. She believes the recent murders in town are supernatural and wants the boys’ help. However, Sheriff Mills tells Sam and Dean that Claire has been getting into trouble lately as she’s been attacking normal people and accusing them of being monsters.

THE VAMPIRE DIARIES 7.11 “Things We Lost in the Fire”: With the traumatic effects of the Phoenix stone taking a toll on his brother, Stefan (Paul Wesley) attempts to help Damon (Ian Somerhalder) regain his grip on reality, while secretly struggling with his own experience in the stone. Elsewhere, Matt (Zach Roerig) and Bonnie (Kat Graham) deal with the fallout after Julian (guest star Todd Lasance) and his men take over Mystic Falls, leading Matt to spiral out of control and into trouble with an officer named Penny (guest star Ana Nogueira). Meanwhile, Tyler (guest star Michael Trevino) returns to town for Alaric’s (Matt Davis) baby shower and Caroline (Candice King) makes an upsetting discovery involving Alaric and his future plan for the babies.

THE ORIGINALS 3.11 “Wild at Heart”: While Klaus (Joseph Morgan) finds himself dealing with pressing matters at home, Elijah (Daniel Gillies) reluctantly aligns with Aya (guest star Tracy Ifeachor) after learning that she may have knowledge of an elusive weapon that could kill an Original vampire for good. Meanwhile, alone and shunned by her coven of witches, a desperate Davina (Danielle Campbell) is left conflicted after she is approached with an enticing offer that could bring her one step closer to reuniting with Kol. Phoebe Tonkin and Charles Michael Davis also star.