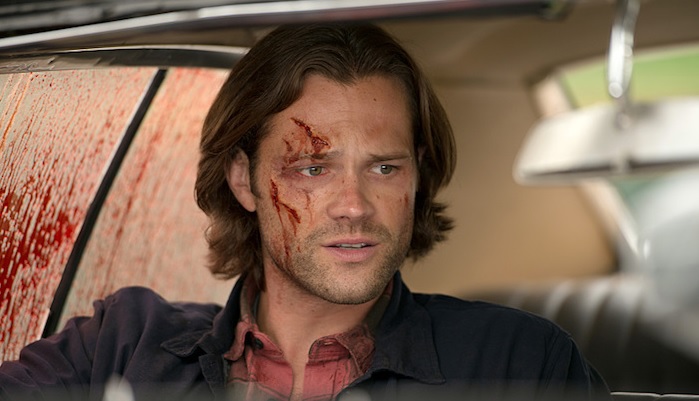 SUPERNATURAL fans know how important the Impala is to the show and this week we finally got to see an episode from the car’s POV. During a recent visit to the SUPERNATURAL set in Vancouver, stars Jensen Ackles and Jared Padalecki shared their thoughts on filming the episode.

The episode “was certainly different and unique,” according to Ackles. “It was the first ever [time] in 200 and something episodes that we shot like that,” Padalecki clarified. “It was a brand new style.” The boys went on to explain that the biggest and most time-consuming task with regards to filming “Baby” was rigging the cameras, which all showed unique angles in this episode (and don’t focus directly on the action like they would in a normal episode).

The return of Matt Cohen as John Winchester (or, perhaps, God masquerading as John Winchester?) was a nice surprise, said the actors. And Padalecki thought it was interesting to bring back Cohen, who has played Young John in several past episodes, instead of Jeffrey Dean Morgan, who originated the role, because “it puts Sam in an even more awkward position. This wasn’t the dad that he knew, [it was the one] he met later in life. But it wasn’t the dad he knew, so it really set up Sam unawares” and then led into an emotional scene for the brothers.

For the actors, filming the Sam and Dean car “chick flick” moment was a nice one. “What a cool [thing], we never see the boys do this stuff and I can’t wait to see it,” Padalecki said. “But to me, that should be something we do more often. What a cool glimpse into the Winchesters and how they travel.”

Related: Ackles & Padalecki discuss Dean’s bond with Amara & the nature of the Darkness

Speaking of a cool glimpse, SUPERNATURAL’s Picture Car Coordinator Jeff Budnick told us during our set visit that they have a version of the Impala where the roof comes right off. “So that shot from [up top] is a cutaway car we have. Exact same car, but the roof comes off, the front comes off, the back comes off and all of the doors come off. It’s a cutaway car so we can get different camera angles. The floor comes out so we can get a shot up the leg.”

You may have also noticed how banged up the poor Impala was by the end of the episode. Budnick said that they messed up all of the Impalas they have on hand — except for the one he says is in the best condition of their fleet (which has 8 cars in total, with a ninth car used for parts). “This one was put away for that episode. This car is not even seen,” he explained when he took us to see the “mint condition” car. But for the ones that were destroyed, Budnick said that fake blood was everywhere in the cars, including staining the carpets. “I think five of [the cars] had to get new headliners, because of the cameras ripping through the headliners. [There we so many] cameras in the car and we had to put new carpets and the dashes got cracked. So it was a lot of work to get them all back to normal.” And Budnick also told us that they built a special rig in the trunk for “Baby” – “the sound guy rode around in the trunk of the car for a lot of the [interior car scenes].”

Meanwhile, Cas stepped into a research role in “Baby”, but that role seems short-lived, according to Misha Collins. When asked about about Cas being back in the “help the boys/figure stuff out role” in episode 11.04 and whether we would see more of that in the season to come, Collins said there’s “not a lot of that”. Sorry, fans!

Stay tuned for more from the SUPERNATURAL set, including more interviews with the actors and a behind the scenes look at the sets, props and VFX.