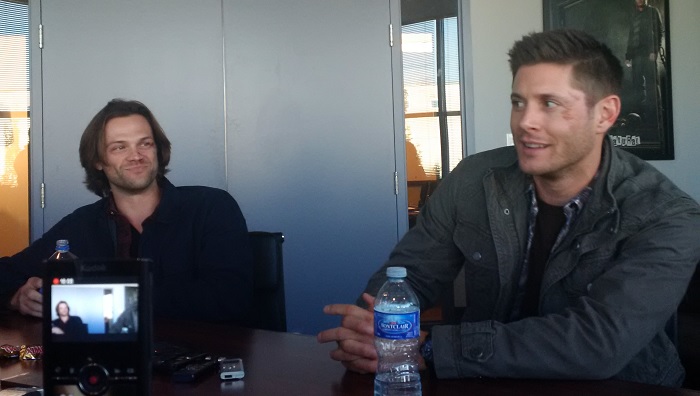 Sam Winchester has visions of the devil on SUPERNATURAL. And, from the looks of the preview for the mid-season finale, the devil is making a reappearance in the next episode, just in time to leave us with one hell (no pun intended) of a cliffhanger over the holidays.

When we visited the SUPERNATURAL set in Vancouver, the cast and crew were filming episode 11.10, which is first episode to air after the holiday hiatus. We spoke to stars Jared Paladaecki and Jensen Ackles, who shared what’s to come in both the mid-season finale and the January return.

“Obviously you can see that we’re a little beat up,” Padalecki points out in the video below, indicating that a big fight is likely to come in episode 11.10. “I said this the other day, in the makeup trailer, that these two episodes [11.09 and 11.10] are my favorite episodes of SUPERNATURAL in a long, long time. I love the twists and turns, [none of which he could spoil for us]. I wouldn’t expect the brothers to go where they go until at least the season finale, but we get right to it. And the brothers are very committed to fighting alongside each other in getting rid of the Darkness, in trying to figure out what it’s going to take and how to do it and kind of going through all alleys and channels.”

“Sam starts exploring these visions,” Ackles explained. “And he starts trying to figure out who is talking to him and what they mean. He kind of takes it upon himself to go there without Dean and kind of leaves me in the dust and so, then of course, Dean has to follow. But what that does is make for some interesting alliances.”

Related: Go behind the scenes of the SUPERNATURAL VFX department

What, exactly, does that mean? Well, if you watched the most recent episode and saw the preview for the mid-season finale, it looks that Sam is headed towards the cage. According to the synopsis for the upcoming episode, “Sam and Crowley come up with a plan that could have disastrous consequences”, so it’s likely that Sam asks Crowley to help him get to Lucifer, convinced that the devil has the answers that he needs.

We also know, thanks to Padalecki and Ackles, that Billie the reaper will be making a return appearance in episode 11.10. Will Dean use her to follow Sam into Hell (via Purgatory) or could she give him valuable intel about the Darkness? Whichever it is, Ackles said that she is one of “interesting alliances”.

Meanwhile, we also know in episode 11.09 that Amara will unleash her power on a town and its people as she issues a challenge. And Dean will be trying to better understand his connection with her. How long is he going to keep that connection from his brother? It’s “to be determined”, Ackles had warned in our other interview, indicating that Sam may not know throughout episodes 9 and 10. But Padalecki said that in the two upcoming episodes “we’ll have some other cool characters that have interesting things to say about the Darkness.” Ackles also added that we’ll get more of an indication of “what she is and where she comes from [and] how she ties in to the whole thing.”