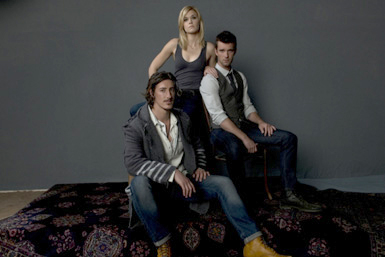 Normally viewers are leery of checking out a television series in its third season, but here are a few reasons why now is the perfect time for you to check out Syfy’s supernatural thriller series HAVEN:

Stephen King
Best known as the King of Horror, Stephen King inspired much of modern day supernatural film and television; and many may not realize it but HAVEN is based on the Stephen King story “The Colorado Kid.”  However, HAVEN is not your typical horror series.  There are elements that certainly terrifying, but really HAVEN is a series that takes viewers on a supernatural thrill-ride of mystery, with wonderful homages and nods to the work of Stephen King laced throughout.  In fact, in every fiber of HAVEN, Kings’ presence is felt — and it makes for a fine layer of intrigue and suspense.

The “Troubles”
HAVEN is about a small town set in Haven, Maine where there is mysterious goings on called the “troubles.”  More specifically, some of the town’s inhabitants have begun to demonstrate supernatural abilities, both for good and for evil; which has spurned a handful of the townsfolk investigating the cause of the “troubles” and whether there is a cure.  Led by the local police chief and an ex-FBI agent, as well as a few other handy citizens helping out, each week it is a struggle to help contain the “troubles” and ensure the safety of everyone.  The “troubles” may be anything from deadly doppelgangers, nightmares coming to life, stuffed creatures reanimating, killer shadows, cannibals, mummification, time-loops, demonic trees, firestarters and shapeshifters.  For police chief Nathan Wuornos (Lucas Bryant), his “trouble” means he cannot physically feel anything – he cannot touch or be touched.  So while HAVEN continues to explore a variety of creepy and yet haunting stories of those affected by the “troubles” and the agony it wreaks in their lives – it does not necessary end well for those caught up in these events.   For some, living in the town of Haven is not a blessing; it is a curse and one that they desperately would love to have gone from their lives.

The Mystery Woman
HAVEN is not simply the story of a town infested with “troubled” folk; it is the tale of a young woman who may hold the answer to the “troubles.”  When Audrey Parker (Emily Rose) first came to Haven, she thought she was an FBI agent investigating a bizarre death.  However, at the end of the first season of HAVEN, she suddenly found herself face-to-face with the real Audrey Parker – and she realized that somehow she had taken on another woman’s identity without knowing it.  So if she was not really Audrey Parker, who was she?  Audrey’s quest led her discover that she had lived in Haven twice before:  once 27 years earlier, known as a woman by the name of Lucy – who had been there that fateful day that The Colorado Kid died – and decades before as a woman known as Sarah.  It was unfathomable to Audrey that she had led two prior lives in Haven – and yet had not aged a day – and she could not remember anything from those other lifetimes.  So the mystery of “who is Audrey Parker?” hangs over her as she works to find out the answers to what causes the “troubles” and what part she has to play in it.

The Star-Crossed Lovers
Cursed to not feel the slightest sensation, it was with elation and glee that Nathan Wuornos inadvertently discovered that he could feel Audrey’s touch.  It was a secret he kept for the better part of the first season unsure what it meant – that Audrey would be the one person her could feel.  Over the course of the first and second seasons, Nathan and Audrey’s dance of curiosity and attraction has held fans spellbound; and with every accidental caress, the sparks flew.  But after recently finding out that Audrey’s time in Haven may run out in 49 days – after which she could conceivably disappear again for another 27 years – the romance has been brought to a screeching halt even before it has a chance to really begin.  Yet, anyone who is watching knows that this is not the end.  Their chemistry is too palpable to ignore.

The Third Man
Then complementing the mystery of Audrey Parker is the mystery of Duke Crocker (Eric Balfour).  On first glance, Duke was the resident bad-boy smuggler who seemed to exist to taunt Nathan and tease Audrey; but as the second season finally revealed, there is more to Duke than any of them imagined.  He has not escaped Haven’s “troubles,” he is one integral part of it.  He could be Haven’s cure, as it is family’s legacy to reap the “troubled” thereby saving future generations from ever being afflicted.  However, Duke was not thrilled to find out that his life’s destiny was to be a killer.  So he too, like Audrey, is desperate to find out the true source of Haven’s “troubles,” and fix it before his darker nature overtakes him and turns him into a monster.  Inexplicably drawn to Audrey, who may be his own salvation, Duke is working feverishly to help her find the answers to her past and to uncover the truth of what happened with The Colorado Kid; for everyone’s fates may depend on it.

With these five tantalizing reasons itching to be explored further, this is the perfect time to jump right in.  With the clock ticking down on Audrey’s time in Haven, the story has been accelerated and concentrated on the mystery of Audrey.  In fact, this week’s upcoming episode “The Farmer” provides an easy entry point for new viewers who have never seen an episode of HAVEN before.   This is the time to meet Nathan, Audrey and Duke and find out what the “troubles” are all about.  It only takes one episode to see why HAVEN has captured the hearts and imaginations of fans.  There is an addictiveness to the show that compels one to keep watching and tuning in.  Come and discover your newest Friday night thrill – HAVEN is waiting.

HAVEN airs Friday nights at 10PM on Syfy (Fridays at 9PM on Showcase in Canada).  It will not only provide a provocative mystery, it will be a spine-chilling thrill ride from beginning to end.  Escape to HAVEN now!